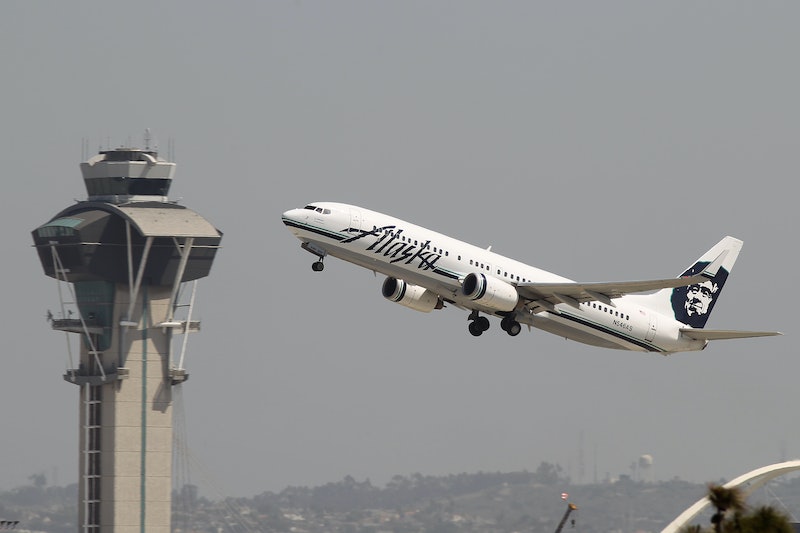 If there's one place you really don't appreciate being catcalled (though let's be honest: in reality, there's way more than one), it's at your job. But that is exactly what makes this story of a man who got kicked off a flight for allegedly catcalling a flight attendant so awesome. The alleged incident, which happened on a recent Alaska Airlines flight, went viral after a passenger posted about it on Facebook; Alaska Airlines subsequently confirmed to Bustle that "the account on Facebook from our passenger is accurate." People facing repercussions for catcalling and street harassment is something that should really happen more — and this is a prime example of it in action.

In a recent post on Facebook, passenger Amber Nelson described an alleged incident on an Alaska Airlines flight in which an unnamed male passenger reportedly catcalled a flight attendant during the onboard safety presentation. That situation? Not OK. I mean, apparently women can't even be at work, giving a demonstration on how to survive in the event of a plane crash without being harassed? That is a super, super low bar, society — and yet somehow, we are still not clearing it. And that is really messed up.

But if we haven't yet reached a point where we've done away with the idea that women in public are automatically objects for men to comment upon and covet, at least we are getting to a point where enough people acknowledge it's not OK that sometimes, something is actually done about it. Case in point: The passenger on this Alaska Airlines flight who was ultimately escorted from the plane.

This is the part where you hear cheers from every person who has ever been catcalled and known there was no real way to make the harasser behind it face any sort of consequence for making you feel uncomfortable and objectified.

As previously noted, Alaska Airlines has confirmed the incident to Bustle. The airline also notes in a statement provided to Bustle, "We stand behind the actions taken by our employees." Hear, hear.

As Nelson lays out in her post, catcalling a flight attendant is not only incredibly disrespectful, it can also make women passengers feel uncomfortable and even unsafe. After all, a man who feels comfortable treating a woman doing her job like a sex object is probably unlikely to treat any women sitting next to him with respect, either.

Nelson tells Bustle that one of her motivations in posting the story was to thank Alaska Airlines for the way they handled the situation and for "treating their passengers with respect."

"I think it's important to call out good behavior when you see it," she tells Bustle in an email. And she's absolutely right — because then we can hold up them up as examples of exactly what to do to combat rape culture.

Most of the time, men who catcall women don't ever experience any consequence. Women often don't feel comfortable confronting men directly — because, sure, most men won't be violent in response, but some will be. And so most of the time, it goes on unchecked.

But every now and then, apparently, some dude gets to experience repercussions. And the women of the world cheer.

More like this
5 Ways To Stand In Solidarity With Women In America From The UK
By Sophie McEvoy
How To Fight For Reproductive Rights, Based On How Much Time You Have
By Courtney Young
Why You're Seeing Green Bandanas At Abortion Rights Protests
By Lexi Inks
Windrush Victims Are Still Waiting For Compensation
By Sam Ramsden
Get Even More From Bustle — Sign Up For The Newsletter