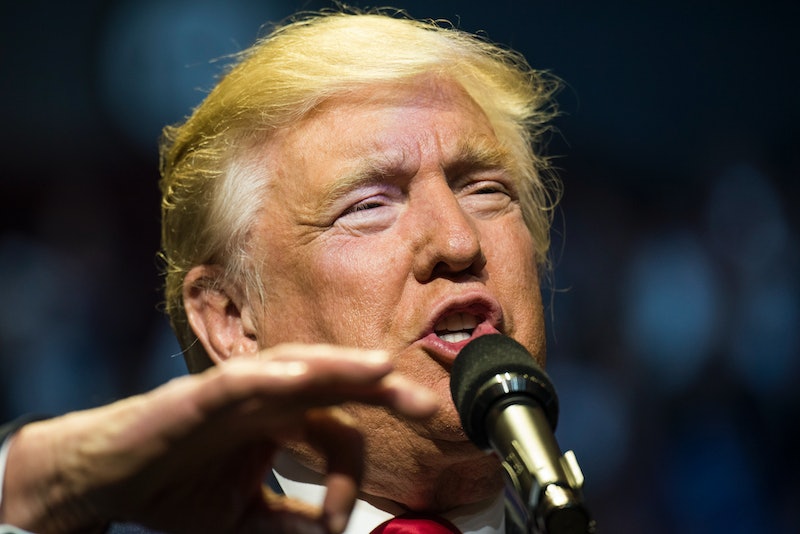 New claims from anonymous former staffers of NBC's Celebrity Apprentice allege that Trump made offensive comments about Khloé Kardashian and her appearance while she was on the show. And according to one source who spoke with The Huffington Post, she allegedly wasn't fired "on merit" but "on him not liking her." One former editor claimed to the publication that during the 2009 season, on which Kardashian was a contestant, Trump "basically wanted to get rid of her. He called her a piglet."

Update: Kardashian told Extra in response to the claims, "For Trump or any human being to judge someone off looks alone... I think that’s really immature and cruel," and added, "How am I dragged into everything?"

Earlier: A source alleged that he said, "What is this? We can’t even get the hot one?" with another source claiming that Trump asked, "Why don't we fire Khloé? Why did we get the ugly Kardashian?" The sources who made the claims about the alleged the behind-the-scenes conversation said the way Kardashian was let go from the show "was absolutely ridiculous" and called Trump "misogynistic" and an "egomaniac."

Bustle has reached out to Trump, Kardashian, and NBC for comment, but has not yet received any responses.

The claims about Trump's alleged words about Kardashian were reported around the same time that Apprentice Season 5 contestant Summer Zervos claimed in a press conference with lawyer Gloria Allred that Trump sexually abused her when she contacted him for professional advice after having appeared on the show. Bustle reached out to Trump's rep for comment on Zervos' claim, but has not yet received a response.

The allegations about Kardashian also follow the now infamous and triggering Access Hollywood leaked footage wherein Trump himself says, "When you're a star, they let you do it. You can do anything."