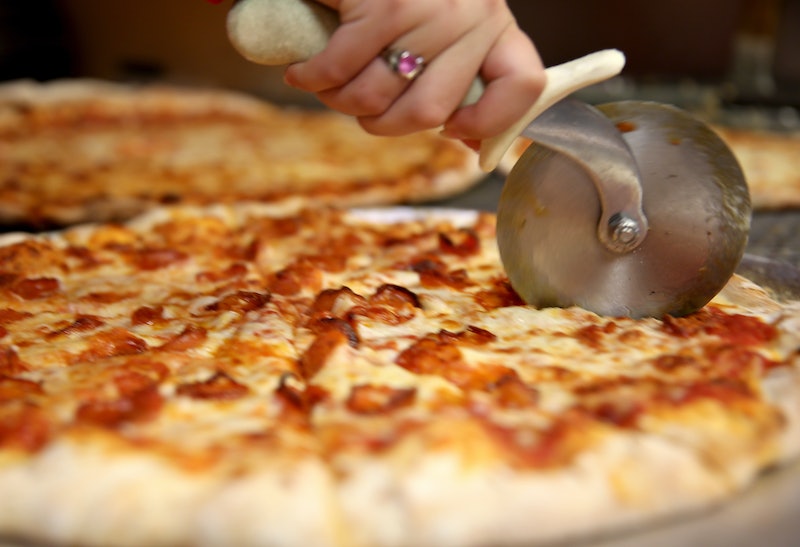 Pizza is the one constant in this topsy-turvy world, your safe food space. You know it like the back of your hand. At least you thought you did, but according to London-based food expert Daniel Young, author of Where To Eat Pizza, you've been eating pizza wrong this whole time. Even worse, your bad pizza method may have been affecting your pizza tasting experience for the worse. But it's not too late to make things right.

Young learned his pizza strategy from Italian pizza chef Enzo Coccia, who's been firing up the pizza oven since childhood in his father's pizzeria, so you know it's legit. As demonstrated in a video at The DailyMail, you're supposed to fold the pizza up like a little cheesy packet — and not hold it by the crust. For an individual-sized round pizza, this means folding it in half and then half again, so the resulting non-slice is a four-layered triangle. Then dig in from the crust end first. Mind. Blown.

Why eat pizza the folded way? Well, first and foremost, the folding method traps all the toppings safely inside your serving, instead of letting them slip-side off the slice. It also causes you to experience the pizza in thicker bread-first bites as a delicious pocket with fillings, instead of as a thin mess of stuff that you have to stuff into your mouth haphazardly.

The folded pizza method may protect against the dreaded "pizza palate" injury — when molten cheese at the top and tip of the pie hits and burns the roof of your mouth. Last but not least, a folded pizza slice might help to re-squish cooling cheese, instead of seeing it congeal into an unappetizing blob on the exposed top of the unfolded slice. All-around win.

To be fair, your incorrect pizza eating may not really have been your fault. For one thing, you were probably surrounded by bad influences as a child, like family members and classmates who were eating pizza the wrong way, by the crust, with toppings perched precariously in the air.

Also, many lesser-quality pizzas unfortunately do not lend themselves to the proper folded method because they are too thick. I suspect that Young and Coccia would advise you to steer clear of those impostor pizzas altogether. New York-style pizza is also foldable, though it is not eaten crust-first that way. Perhaps special dispensations are in order for the famous Chicago slice, which may be eaten with a fork and knife.

If you're still confused, there are plenty of "how to eat pizza" videos to help you, or you could attend one of Young's pizza lectures. Change is hard, but worth it.