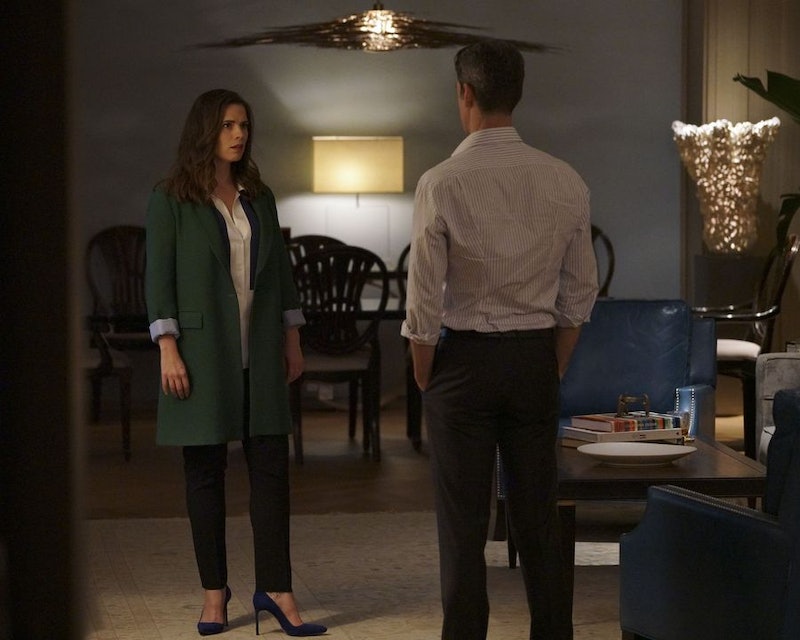 Hayes Morrison got her cushy new Conviction Integrity Unit job on Conviction because she found herself in a bit of trouble — she had plenty of cocaine on her, and her good old pal District Attorney Wallace helped her out by giving her a sweetheart deal instead of pressing charges. It’s nice being a former president’s daughter, isn’t it? I always thought there was something romantic undercover with these two, and it turns out, I was partly right. Hayes and Wallace almost hooked up on Conviction , and we got a glimpse into their past.

It’s obvious that Hayes and Wallace will fight about, well, anything, because Hayes likes to fight about, well, anything. This time, it was the NYPD Counterterrorism Unit and how they illegally broke into a bigot’s home. Wallace knew this and tried to get Hayes to lay off, and she didn’t, and they got in a fight, during which he referenced “what happened in Chicago.” Sounds like Hayes ran off when the relationship got tough or too deep, which is totally something I see for Hayes. She even got fired from her job! Hayes is a runner, but I want to know more about their affair. How long? Why does his mom hate her? Why does her dad love everyone and cheat on her mother?

Then, these two made out like hormonal teenagers, only to be rudely interrupted by beeping pagers and cell phones. Why? The word got out of how Hayes got her fancy new job, and wow, is the public not going to be happy that her job was part of a bribe to put her back in the good standing of the public and not a more altruistic position. If Hayes and Wallace were going to get back together, the pause button is definitely hit on this relationship by now.