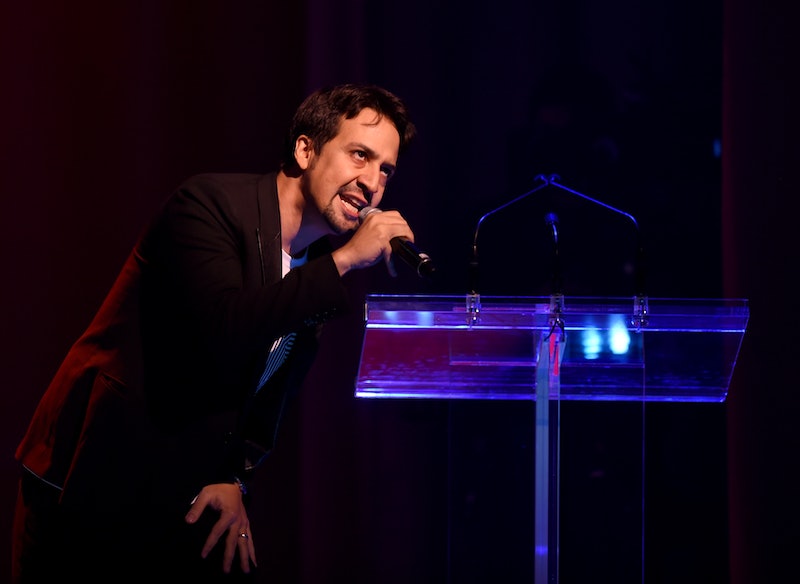 Many celebrities have publicly supported Hillary Clinton's presidential campaign, and musical theater artists are not to be outdone. On Oct. 17, the stars came out for "Stronger Together," a fundraiser for Clinton also known as Broadway for Hillary, with performers including Lin-Manuel Miranda, Renée Elise Goldsberry, Neil Patrick Harris, Sarah Jessica Parker, and many more. The show, which benefited the Hillary Victory Fund, was hosted by Tony Award winner Billy Crystal, and Hillary's daughter Chelsea Clinton and husband Bill Clinton were special guests. It took place at the St. James Theatre in New York City. Many of the night's performances were tailored to the pro-Clinton theme, with Crystal and the Adult Chorus opening the show with "Hillary Tonight," adapted from A Funny Thing Happened on the Way to the Forum.

Broadway for Hillary was streamed live through Clinton's website, as well as her Facebook and Youtube pages. Republican candidate Donald Trump has also live-streamed fundraisers before, but Hillary's "Stronger Together" was attended by far more celebrities than any of Trump's fundraising events, the Los Angeles Times reported.

But now that "Stronger Together" is over, you may be asking how to re-watch the amazing performances. Here's where it gets tricky; many of the performances haven't been officially uploaded. However, CBSN has posted some of the show, including performances from Neil Patrick Harris, Rebecca Naomi Jones, Stephen Trask, Emily Blunt, Bernadette Peters, and speeches by Crystal and Bill Clinton.

You can also check out Lin-Manuel Miranda and Renée Elise Goldsberry's unique rework of "The World Was Wide Enough" from Hamilton, courtesy of entertainment reporter Ashley Lee, who has also posted several other videos from the fundraiser on her Twitter account.

During the show, Hillary herself appeared via video and joked about having unsuccessfully auditioned for "Stronger Together."

"I wish I could be there with you in person," Hillary said. "I auditioned for tonight's show and I wanted to sing with you, but Harvey and Jordan said I didn't make the cut. Oh well." Later on, she added, "We're in the final stretch of this campaign and we need your help to reach as many people as possible between now and election day."

While Broadway for Hillary was free to watch online, it was likely difficult to get a ticket to Clinton's fundraiser; balcony seats cost $45, but there were also ten premium orchestra seats up for grabs for a whopping $100,000 combined, according to the Daily Mail.

Hopefully more official videos of the event get posted, but in the meantime true musical theater fans will take what they can get.