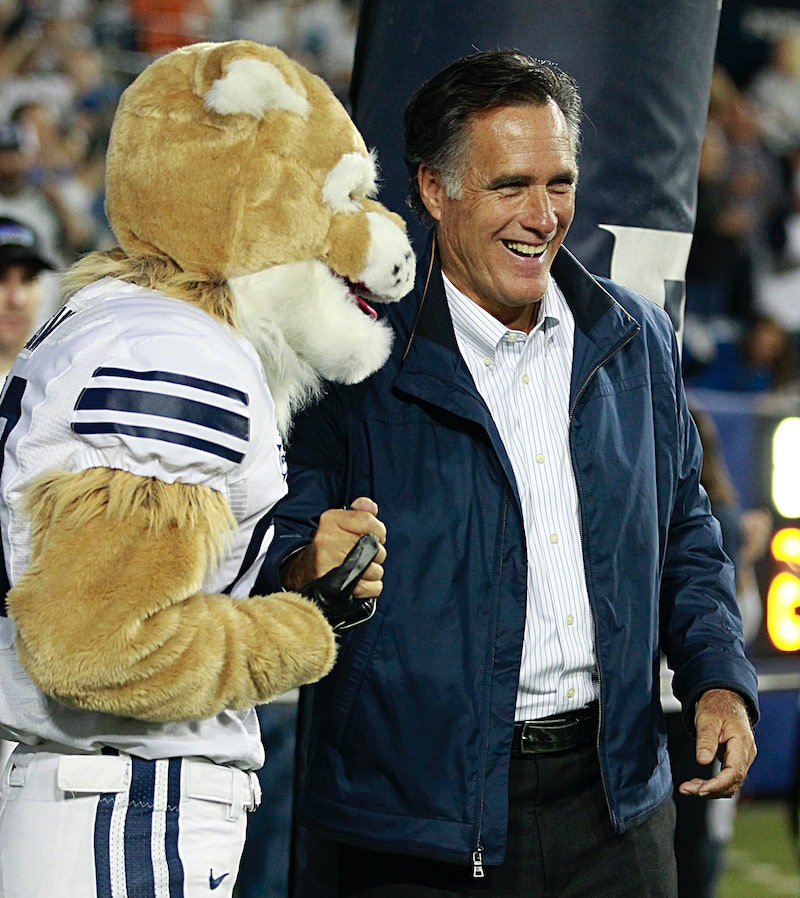 If you are dissatisfied with both Democratic and Republican nominees, and you don't care for the third party candidates Gary Johnson and Jill Stein, then come Nov. 8, you may be considering a write-in candidate. With #NeverTrump trending, a fair number of people are wondering, "can I write in Mitt Romney for president?" And who could blame them? Donald Trump's "Grab them by the p*ssy" tape — along with literally everything else that's happened this election cycle — makes Mitt Romney's "binders full of women" look almost innocent.

Back in June, Conservatives were concerned that nominating a popular third-party candidate could split the vote and ensure a victory for the Democrats. Mere weeks before the election, though, with Trump's numbers plummeting and his campaign having turned pretty much into scorched earth, the point may be moot — which, in turn, has prompted many to reconsider supporting a write-in candidate on the ballot.

To whit, consider an internet poll conducted by MSNBC asking, “Would you vote for Mitt Romney in 2016?” So far, 65 percent of votes cast (23,000 in total) have been in favor, with “Yes, third time's a charm” taking the lead. Additionally, a Facebook group campaign “Write In Mitt Romney 2016” is trying to drum up support for the 2012 GOP nominee.

But before you pen Romney's name on the ballot, it's worth noting that the write-in process is slightly more nuanced than you might think. If you want to write anyone in — whether that's Romney or not — and have your vote counted, there are a few things you should know.

According to myth-busting site Snopes, the rules of write-ins during a presidential election change depending on the state in which you are registered to vote. In nine states, write-ins are not allowed during a presidential election: If you reside in Arkansas, Louisiana, Mississippi, Hawaii, New Mexico, Nevada, Oklahoma, South Carolina, or South Dakota you will need to pick one of the candidates already listed on the ballot. (Sorry). What's more, in 34 states, write-in votes are only counted if the candidate in question has filed the correct paperwork, meaning that Romney would have had to officially register in each of these states by a specific deadline.

There are eight states, however — Alabama, Vermont, Delaware, Iowa, New Hampshire, Wyoming, New Jersey, and Oregon — that allow voters to write in any name they want on the presidential ballot. That's right: You could write-in Barak Obama or Homer Simpson and have your vote legally counted if you're voting in one of those states. The one caveat, though, is that you'd better make sure you spell your write-in candidate of choice's name correctly for your vote to make a real impression. For more information on the rules of write-ins be sure to check out the National Association of Secretaries of State.

While Senator Bernie Sanders has endorsed Clinton and discouraged his passionate supporters from casting a "protest vote" for him (even in his home state, where write-ins are allowed), Romney has issued no such statement. The former Massachusetts governor has been very vocal about his distaste for Trump this election cycle, going so far as to say in several interviews that he would write-in his wife's name rather than vote for the GOP nominee. Ann Romney would be “an ideal president,” former Massachusetts governor told The Atlantic. While Romney's feelings towards Trump are shared by many other moderate Conservative voters, he is keeping mum on the subject of whether he wants voters to follow his example.

If you are considering voting for a write-in candidate, keep in mind that a vote for Mitt Romney may actually help Clinton. But whatever you choose, it’s important to exercise your democratic right at the polls come November.