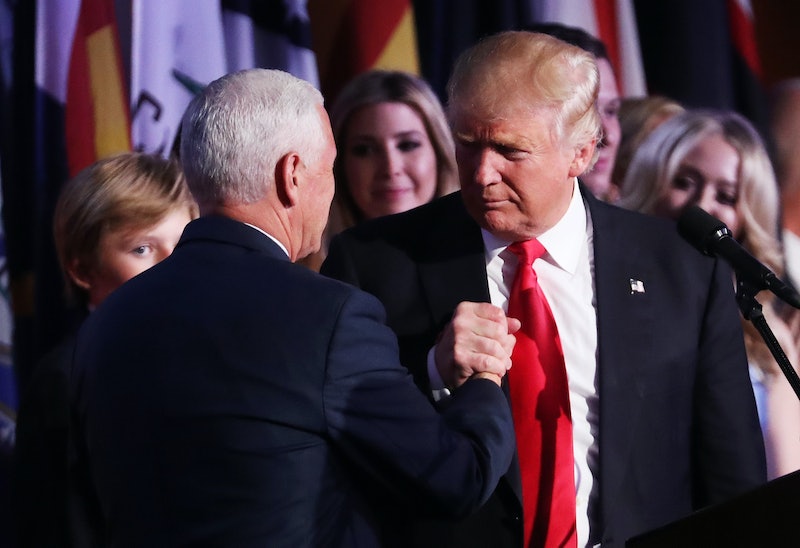 Hi. Almost a decade ago, some guy raped me. I have spent a lot of time working to heal from it, with varying degrees of success. I think I'm doing pretty well, considering.

When I thought of my assault coming into play while following politics, I imagined it feeling relevant during discussions of policy to prosecute rapists, or the untested rape kit backlog. I did not ever imagine it coming up because the person who has become our president-elect has been recorded making crude, cavalier comments about groping and assaulting women on tape. And yet here we are.

Of all the things I'm concerned about regarding a Trump presidency, his documented attitudes about assault and women's bodies aren't at the top. I'm terrified of the power he has to hurt immigrants who are seeking a better life in this country — not just through his policy, but also through perpetuating destructive stereotypes. I'm terrified that he'll not only support legislation that will curtail the rights of queer people and minorities, but also appoint Supreme Court justices who will help curtail the rights of queer people and minority communities for generations to come. I'm terrified for people with health issues who will likely have their coverage gutted. I'm terrified that his administration will overturn Roe v Wade, and that as vice president, Mike Pence will lead regressive measures that curtail women's reproductive rights in the same way he did in Indiana. I'm terrified of all the things I don't even know to be scared of yet.

But the assault stuff, yeah, it stings. I learned tonight that maybe more people don't believe women than do. I learned that more people want to believe that a group of women would coordinate to lie about a man assaulting or harassing them before they would believe that a man habitually touched women in ways that were inappropriate. I learned what I had kind of always known: Many, many people don't care about a woman who says she has been assaulted. But I guess I thought that when it came to something on a national stage, like electing the president, things might be different. And like a lot of Americans, I feel pretty fucking naive right about now.