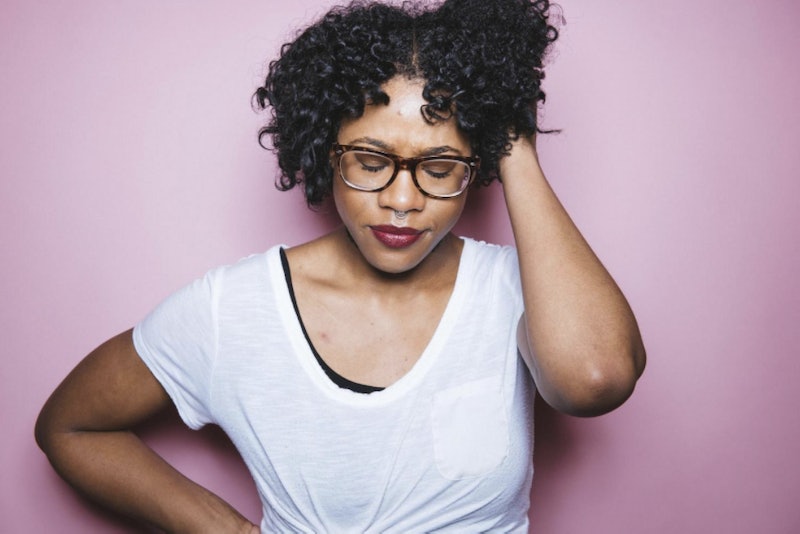 I did not sleep much on Tuesday night. With Donald Trump inching his way toward the presidency every hour and Twitter users prematurely declaring Hillary Clinton's defeat, I got about three hours of sleep total. And much to my shock, the sun rose the next morning. Trump had become President-elect of the United States and the sun had the nerve to rise.

On Wednesday, I went about my day in shock and utter disbelief at the election results. I saw solemn faces everywhere I went, and the atmosphere in New York City was one of sadness and quiet. I’ll admit, I was irritated and disgusted when I encountered white men and women who seemed significantly less affected by the results than I. My heart ached as I passed men and women of color, some with children in tow, on the streets. And I thought of all of the text messages I've gotten from my Muslim, Mexican, gay, etc. friends asking, “What’s going to happen to me?”

Throughout his campaign, marred with hatred, xenophobia, racism, sexism, ignorance, self-service, fear-mongering, white supremacy and the like, I never thought Trump would win. And as he won state after state on election night, I couldn’t help but think, “OK, he can’t really win, right? I mean, people know this is absurd, right?”

To be honest, I expected more from America. I expected more from the millions of white women and men whose votes assured Trump the presidency. These loyal Trump supporters seemed most concerned with one thing: preserving white privilege. And the disgusting statements Trump has made about Mexican-American immigrants, women, war veterans, women’s rights, and more are eerily reminiscent of America’s horrific, racist, sexist history.

Although many white women who support Clinton were devastated to see the election of a man who blatantly insulted women’s reproductive rights, the election results were a special slap in the face for Black women — who experience a threefold bond of oppression due to race, sex, and class. As the votes for the Republican nominee came rolling in on election night, I thought of Ida B. Wells, who fought fiercely against lynching; Mary Church Terrell, one of nation’s most well-known Black suffragists; women’s rights activists and abolitionists Sojourner Truth and Harriet Tubman; Claudia Jones, who fought for Black women workers; Shirley Chisholm, the first Black woman elected to the U.S. congress and the first to run for president as a major party candidate, as well as all of the other Black women who took on politicians and entities more dangerous than Trump.

His victory was a direct insult to the work of our foremothers and it legitimized the very abuse and injustice the likes of Wells, Terrell, Truth, etc. fought against.

You see, when the nation elected Trump, it elected a man who initially refused to denounce the Ku Klux Klan — a carefully crafted white supremacist group that has taken aim at Black people most (and has carried out the mob rapes of many 19th century Black women). Yes, he did so eventually, but the damage has already been done. His election is a blatant declaration that alignment with the KKK in the 21st century is not only tolerated, but worthy of praise.

And a “whitelash” it was. The racism and sexism that, in a way, lay dormant in the nation reared its ugly head in the fiercest way. All it needed was a little push, and Trump was happy to give the nudge. Throughout his entire campaign, Trump has proven to be a hero to white nationalists. His victory legitimized the white supremacy that many political leaders and American citizens have long denied exists.

But justice is never permanently defeated, and my anger turned to resolve by Thursday morning. I resolved that if the likes of Tubman, Wells and Jones fought bravely at some of the nation’s most racist, sexist times, we can too. And, much like Chisholm, we too will be "unbought and unbossed."

This is not the end. Much like the election, justice is in the hands of the people. I once heard it said that a nation is only as healthy as its sickest people. And this country will never be great until every oppressed group is healed. And to that end, we will fight.

Through protests, through education, through art, through legislation, through rebellion, justice will be had. Get to know your local leaders (legislators, commissioners, school leaders, etc.) and get involved in charity and justice-seeking organizations.

I woke up the day after the election feeling afraid and hopeless. Those emotions subsided when I remembered that a democracy is about the people. We the people have power. Yes, Trump’s election may be a setback, but our foremothers did not back down, so neither should we.

And when our oppressors go low, we will fight hard, harder than ever before for justice, equality, and restoration.