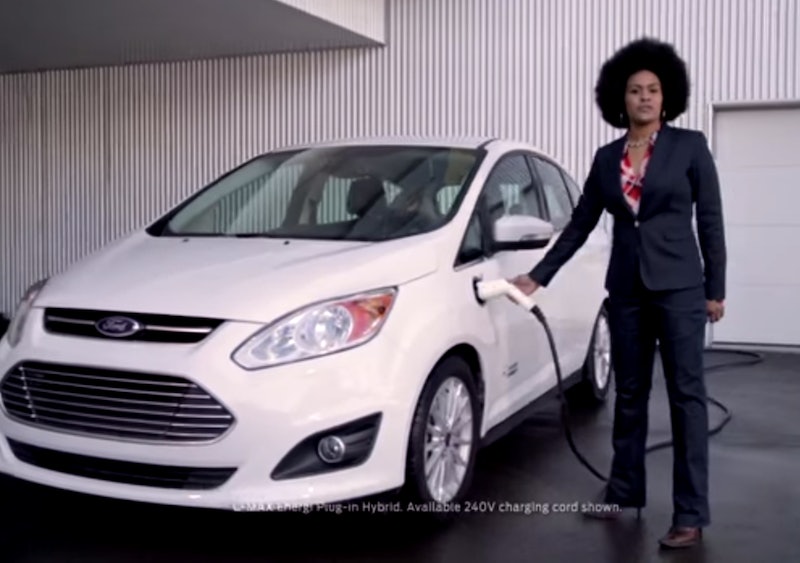 Remember that xenophobic, classist Cadillac commercial that ran during the Olympics? Well, while the rest of us were muting our TVs or gaping in confused disbelief, Ford saw an opportunity. In a new ad for their own hybrid car, the Ford C-MAX, they brilliantly parody Cadillac's original spot with a cheeky, less one percent-focused message of their own.

Although I'm generally skeptical of the radical power of anything trying to sell me something, even I had to admit the new ad is fairly subversive. For starters, instead of an arrogant white man in a business suit talking about how awesome it is that Americans work so much the rest of the world actually considers us crazy, the Ford commercial features real-life entrepreneur Pasho Murray talking about her company, Detroit Dirt, that collects food waste and turns it into compost.

Really, switching out a white man for a woman of color would itself have been enough to earn this ad a progressive label, but Ford really commits to calling out the Cadillac ad, from the first shot of Murray gesturing at a dirt pile instead of a pristine poolside all the way to the end when Cadillac's obnoxious "That's the upside of only taking two weeks off in August," becomes, "That's the upside of giving a damn."

And here I thought nothing could make me give a damn about expensive automobiles.

If you need a refresher on the original ad, it's below. Or, if it's permanently burned into your brain, you can enjoy the better version.

More like this
5 Crystals To Manifest More Money
By Megan McCarty
How To Fight For Reproductive Rights, Based On How Much Time You Have
By Courtney Young
Kris Jenner’s Advice For Kim Kardashian Is Going Viral On TikTok
By Courtney Young
Meet The Disney Imagineer Bringing 'Guardians Of The Galaxy' To Epcot
By Charlie Mock
Get Even More From Bustle — Sign Up For The Newsletter