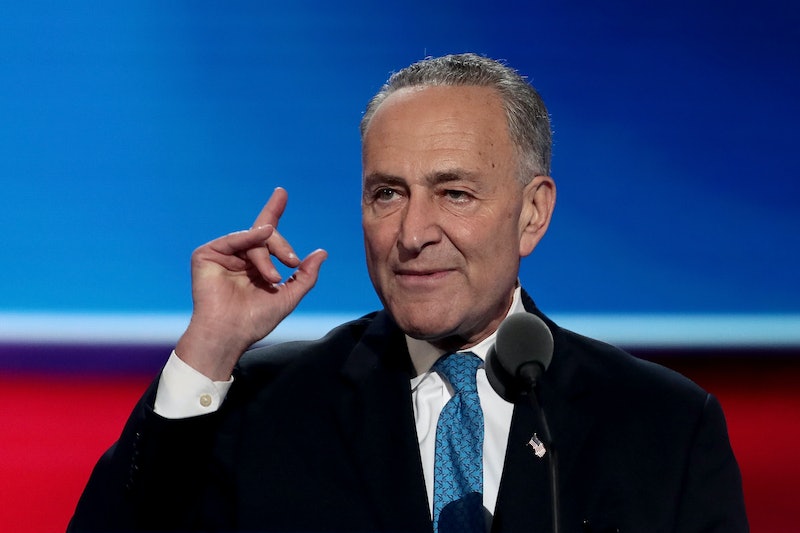 On Wednesday, Senate Democrats decided in a closed-door meeting to make Chuck Schumer the minority leader when Congress is back in session. The new role will make Schumer the most powerful Democrat in the nation's capital. Schumer, who has served as a New York senator since 1999 will be replacing Nevada Sen. Harry Reid, who is retiring.

The new role for Schumer isn't exactly surprising. Although Senate minority whip Dick Durbin was technically higher than Schumer in the Congressional hierarchy, it seemed clear for more than a year that Schumer would take on the party leadership in the Senate. He was long-rumored to be the favorite to lead the Democrats in the Senate. Reid himself had endorsed Schumer as his replacement, telling the Washington Post in March of 2015 that he predicted he would not face party opposition.

What is, perhaps, more unexpected is that Schumer will be leading Democrats against a Republican president, in addition to a Republican-controlled Senate and House of Representatives. Such political opposition will certainly makes Schumer's job of pushing a Democratic legislative agenda an uphill battle, if not all but impossible.

Senate Democrats also made some other noteworthy leadership decisions. Former Democratic presidential nominee, Bernie Sanders, was given the role of outreach chair. Sen. Patty Murray of Washington will be assistant Democratic leader. Durbin will remain in his number two role as minority whip. Wisconsin Sen. Tammy Baldwin was also named the secretary of the Senate Democratic conference. West Virginia Sen. Joe Manchin will be vice chair of the Democratic Policy and Communications Committee.

On Wednesday, Schumer said that while he was committed to working with president-elect Donald Trump, he is insistent on pressing Democratic goals. "When you lose an election like this you can't flinch," he told reporters.