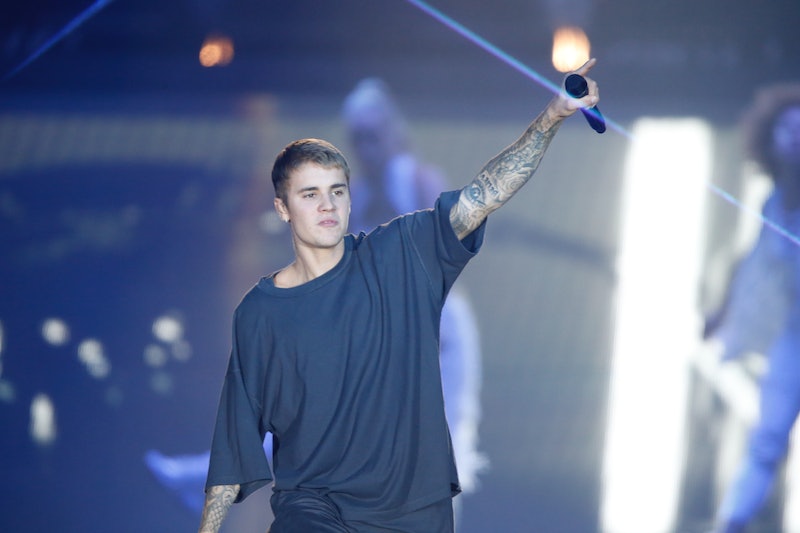 Considering his previous exploits, it's been a relatively quiet year for Justin Bieber. I mean, Bieber's performance at the American Music Awards on Sunday night is one of his few major stateside performances in 2016, but there was one small caveat to this particular performance. Unlike the other acts performing this year, his was streamed from Switzerland. Before you start thinking that this was stunt, let me assure you, Bieber's reason for literally streaming his performance is legit: He's currently on the European leg of his Purpose tour and, as one might suspect, it would just be more hassle than it's worth to fly to and from the awards show for one night.

In light of Bieber's live-streamed performance, what song did he choose to really amp up the awards show crowd? He definitely had to choose carefully because whichever song he chose, it would have to be extra upbeat just to get the crowds appropriately hyped up. He did not disappoint. Choosing to perform "Let Me Love You," Bieber was able to get everyone out of their seats, both at home and abroad, as he is usually wont to do.

"Let Me Love You" was able to hit all the right notes because Bieber was totally in the zone and absolutely killing the performance. Considering this was being live streamed in from the European leg of his Purpose tour, I think it's fair to say Bieber did a heck of a job with his performance.

Naturally, his audience was reduced to nothing but fangirl-y tears. Hearts were swelling, the house was practically shaking with all of Bieber's Canadian glory filling up the house. Even when he's streaming in his performance from afar, the power of Bieber is pretty palpable. It's no wonder he's been front and center on the musical scene in 2016.