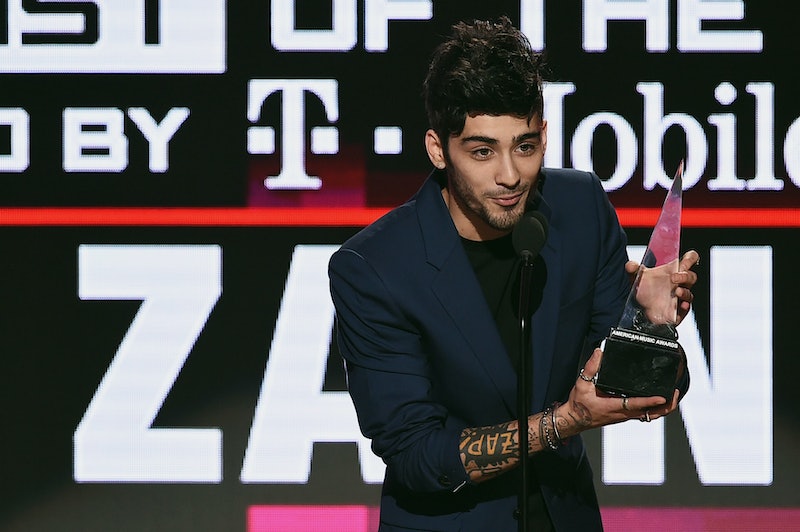 After snagging the highly coveted American Music Award for Favorite New Artist, Zayn Malik took to the stage and finally got a chance to have the spotlight all to himself. Humbly ascending the stage, he took one look at the award and then quipped to the crowd about whether or not the award had just his name on it. If you've loved Malik since his days as one-fifth of One Direction, then you know that this was a bit of shade (full of love, nonetheless) towards the group, who have won numerous AMAs in the past. It was a quick moment, to be sure, but Malik was far from done making his speech and making the most of his time on the American Music Awards stage.

He went on to express nothing but love for his family and fans in helping making the award happen. Because this AMA was awarded on the fact that fan votes were tallied in order to determine a winner, Malik didn't miss a beat in saying a "big, big thank you to all [his] f*cking fans" for the award — a moment that got the first notable bleep of the evening during the live broadcast. Ever the bad boy, could we expect any less from Malik? C'mon now.

What this moment proves is that Malik has no intentions of softening up now that he's gone solo. His image as a solo artist is dedicated to remaining the bad boy with a heart of gold; Sunday night, on the AMAs stage with his half-shaved head and tattooed arms akimbo, a big smile plastered on his face, it was very clear he was keeping that image going.

As if the moment couldn't get any sweeter, after leaving the stage, he paused for a moment to embrace his girlfriend, Gigi Hadid, and plant a kiss on her lips. Congrats, Zayn Malik. You deserve this win.