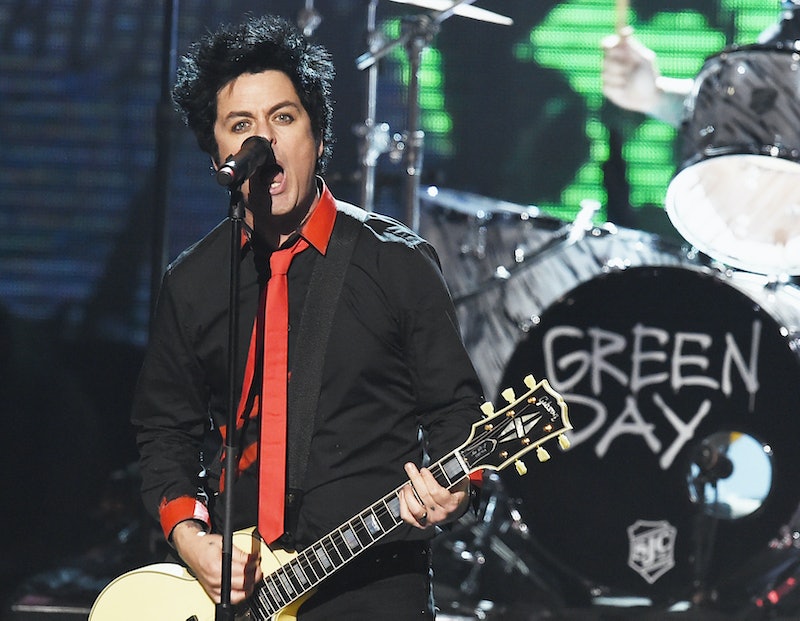 Wanna know a great thing about America? That we have the right to assemble and protest the wrongs and ills of our world, and we saw a great example of that at the AMAs. Green Day protested Donald Trump at the 2016 American Music Awards by interrupting their new single for a ferocious and powerful chant. It's not like Green Day has been quiet politically, well, ever; they've always had their opinions, and they're certainly shouting them out now.

During a performance of their song "Bang Bang," Green Day interrupted their own performance to chant, "No Trump, no KKK, no fascist USA," which is a line from hardcore punk band MDC's song "Born To Die 2016." This chant has been echoed all over the United States since the election results came in, particularly in the anti-Trump protests that have hit the streets as of late.

Green Day has been very vocal about their distaste for America's new president-elect, changing the lyrics at their 2016 MTV European Music Awards performance of "American Idiot" to things like "Trump America" instead of "Idiot America." They even dedicated the song to Donald Trump. The dig at the 2016 EMAs was far more subtle, though; Green Day's statement at the American Music Awards certainly had no nuance. Twitter seemed to like it.

Punk music isn't punk unless it's political, as some of the tweeters said, so I'm all for this protest. And it doesn't have anything to do with my politics. I love that Green Day isn't afraid to say what they want to say. I'm always happy when people have an opinion — It's the American way, isn't it?