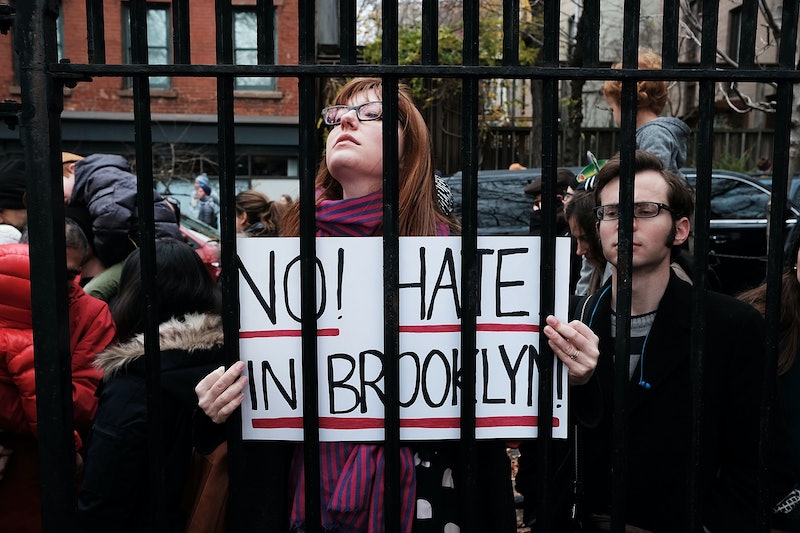 With hate crimes increasing since the election of Donald Trump, some lawmakers are taking steps in the right direction to ensure that their constituents find justice in the face of hatred. One of the most recent political figures to provide legal support to victims of hate crimes in New York is Gov. Andrew Cuomo. On Sunday, he announced the creation of a special police unit addressing hate crimes and a legal fund for victims of them within the city. Given the very real dangers that many of us now face, I believe Cuomo's hate crime unit is beyond necessary in #Trump'sAmerica.

Cuomo's announcement of the special task force came at the same time as a moving speech he gave at the Abyssinian Baptist Church in Harlem, a historic African American church, focusing on the need for tolerance and a shared fight for justice. It couldn't be more timely: the Southern Poverty Law Center reported that there have been 701 reported incidents of harassment, intimidation, or assault against religious, racial, ethnic and gender minorities from Nov. 9 through Nov. 16. An alarming number of these incidents took place at schools, and many included vandalism of people's homes. A slight majority of the incidents contained anti-immigrant messages, but many others were directed specifically at black or LGBTQ people, among a number of other groups targeted.

Cuomo described New York's "explosion of hate crimes" as the impetus behind his special police unit investigating hate crimes, and he is absolutely right. To call the horrifying wave of post-election hate crimes a mere uptick is a gross understatement of the terror experienced by so many of us who find ourselves facing hostile bigots emboldened by a president-elect they see as their white nationalist savior.

Between the New York hate crime unit and the hate crime hotlines now available in some states, a handful of conscientious state governments are taking the safety of their minority citizens seriously. This is the least they can do, and more states (especially those where the majority of their residents voted for Trump) need to follow suit to show their most vulnerable constituents that their safety, livelihoods and peace of mind will not be violated without punishment.

Attorney General Loretta Lynch released a statement on Nov. 18 urging victims of suspected hate crimes to report the incidents to local authorities so the FBI can better investigate them. This serves as a somewhat heartening reminder to those who are victims or could become victims of bigoted violence and intimidation. But it's also a terrible byproduct of the harsh reality of this election: that people whose hearts are filled with hatred and fear feel comfortable expressing their disgusting views, while those who they see as offensively "other" now live in fear. The promise of investigation into these crimes is heartening, but we must do better to prevent them.