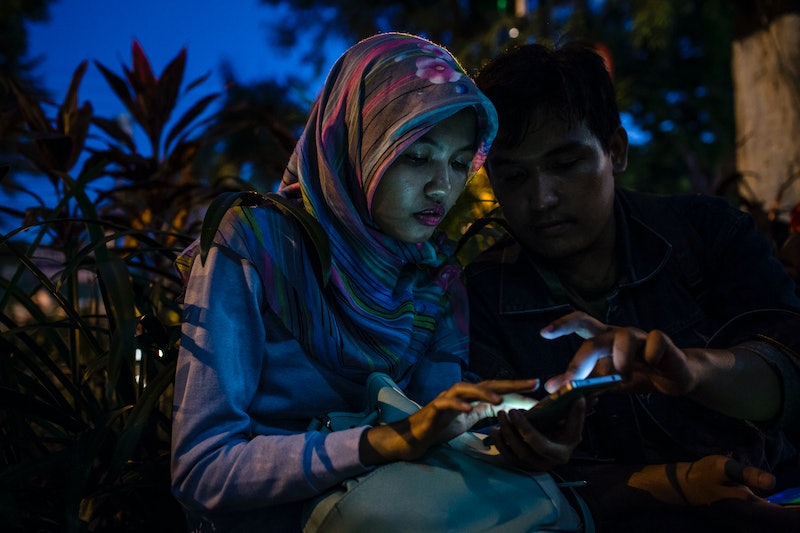 Many Muslim-Americans across the country received automated polling calls, sparking concerns that the calls could be part of President-elect Donald Trump's campaign promise to create a Muslim registry. This incident just goes to show the extent to which Trump has marginalized Muslims in America; the polling calls were actually placed by Emerge USA, a non-profit organization that works to "engage, educate and empower Muslim, South Asian and Arab American (MASA) communities," according to its website.

The organization had actually initiated the polling calls to ask Muslims about their experiences and opinions following Trump's election. But instead, some people who were polled feared that an anti-Islam group was secretly gathering their information. "All of our work is affected, where we can’t get people to participate because they’re afraid," Sarah Cochran, Emerge USA's Virginia branch's director told Reuters.

Unfortunately, Muslim-Americans' fears of discrimination under a Trump administration aren't unfounded; there's literally video evidence of Trump saying there needs to be "a lot of systems" to track Muslims in the country. Trump's Islamophobic statements haven't even been a one-time thing; he went so far as to claim on CNN that the Muslim community doesn't report people like Orlando nightclub shooter Orlando Mateen. (Business Insider published a report to the contrary; Muslims have repeatedly reported extremist threats to law enforcement, FBI officials, researchers, and police.) Still, despite the mountains of evidence, including tweets from Trump himself, a transition team spokesman claimed in a statement that "President-elect Trump has never advocated for any registry or system that tracks individuals based on their religion, and to imply otherwise is completely false."

Trump has also reportedly considered and included people known for their Islamophobia in his transition team, such as national security adviser pick Michael Flynn, who in August said, "This is Islamism, it is a vicious cancer inside the body of 1.7 billion people on this planet and it has to be excised," CNN reported. Yes, you read that right. One of Trump's righthand men called for the abolition of Islam after comparing it to cancer.

Another offensive Trump pick is Frank Gaffney, who is known for running the Center for Security Policy — which has put out a poll about Muslim Americans with “serious methodological problems” according to the Chicago Tribune. He also accused President Obama of being a closet Muslim, and at one point he hosted a white supremacist on his radio show, according to the Chicago Tribune. The topic of discussion? Muslim immigration. Gaffney's Southern Poverty Law Center profile reads like the tagline of a horror film: "Once a respectable Washington insider, Frank Gaffney Jr. is now one of America’s most notorious Islamophobes."

Hate crimes against Muslims nationally spiked 67 percent last year, according to an FBI crime report, and hate crimes in general have been reported by many outlets to be on the rise since Trump's election. Trump has claimed on many occasions that he will be "a president for all Americans." If so, he should consider how his words and actions have negatively impacted the safety and peace of mind of Muslim-Americans. If Trump truly wants to follow through on his claims that he is the president for all of us, he should start by eradicating Islamophobia in himself and his cabinet.

More like this
Prince William Condemns “Unacceptable” Comments Made To A Black Guest At Buckingham Palace
By Shahed Ezaydi
Joe Lycett Just Took HIs David Beckham Qatar Protest To A Whole New Level
By Sophie McEvoy
Footballer Jake Daniels Shared His Thoughts On A World Cup Boycott
By Sam Ramsden
Iran Has Issued A Death Sentence Over Mahsa Amini Protests
By Catharina Cheung, Darshita Goyal and Maxine Harrison
Get Even More From Bustle — Sign Up For The Newsletter