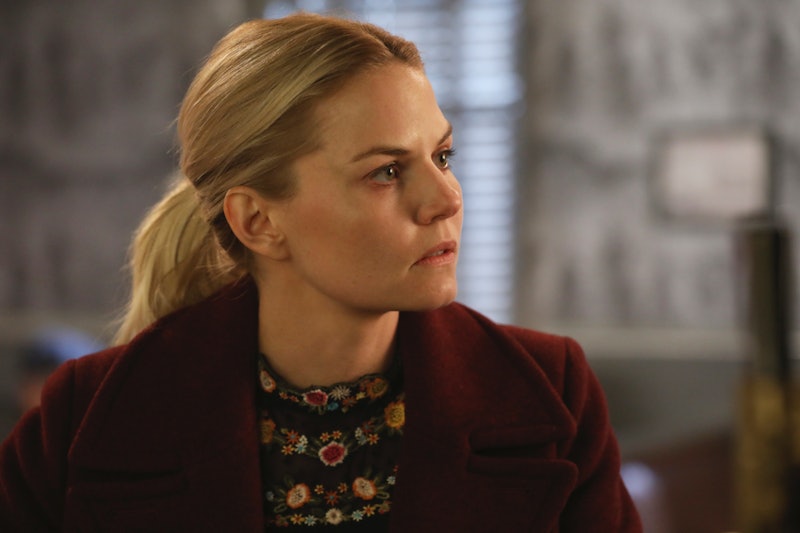 All season long, Emma Swan has been plagued with the idea of who will kill her, the savior, on Once Upon A Time. Ever since the vision of that hooded figure appeared, viewers have been clamoring to know who’s hiding under all that fabric. Well, the Season 6 fall finale has left us in on the big secret — Gideon is the hooded figure on Once Upon A Time . Yep, that’s just what I said — Gideon, as in the nearly newborn son of Belle and Rumpelstiltskin.

I mean, I know that the Rump man told Belle that time moves in weird ways in the land that Gideon had disappeared to, but I didn’t think that by weird ways he meant that Gideon would age 25 years in two weeks. It’s like an episode of The Twilight Zone up in here. Anyway, Rumpelstiltskin and Belle were having a nice, non-fighting conversation (for a change, as Once Upon A Time fans know), and Gideon completely ruined it by magically slamming open the door and slowly revealing his face from under his Emperor Palpatine gear. He greeted Belle and Rumpelstiltskin with a “Hello, mother. Hello, father,” and fear was struck in the hearts of thousands of men and women across our fair land. How are we all supposed to wait until March to find out what happens?

From where I’m sitting, I thought that Henry would be the one to reveal himself as Emma’s eventual killer, partly because Emma said all of that stuff in the faux Enchanted Forest about how Henry becoming violent was the worst thing that could happen, and she doesn’t want to awaken that sort of darkness. Instead, another of Storybrooke’s sons will eventually be Emma’s undoing. Is it possible for Emma to reverse her fate and not be slain by the hooded figure we now know as Gideon? We all just have to sit tight and wait until 2017 to see (yikes).