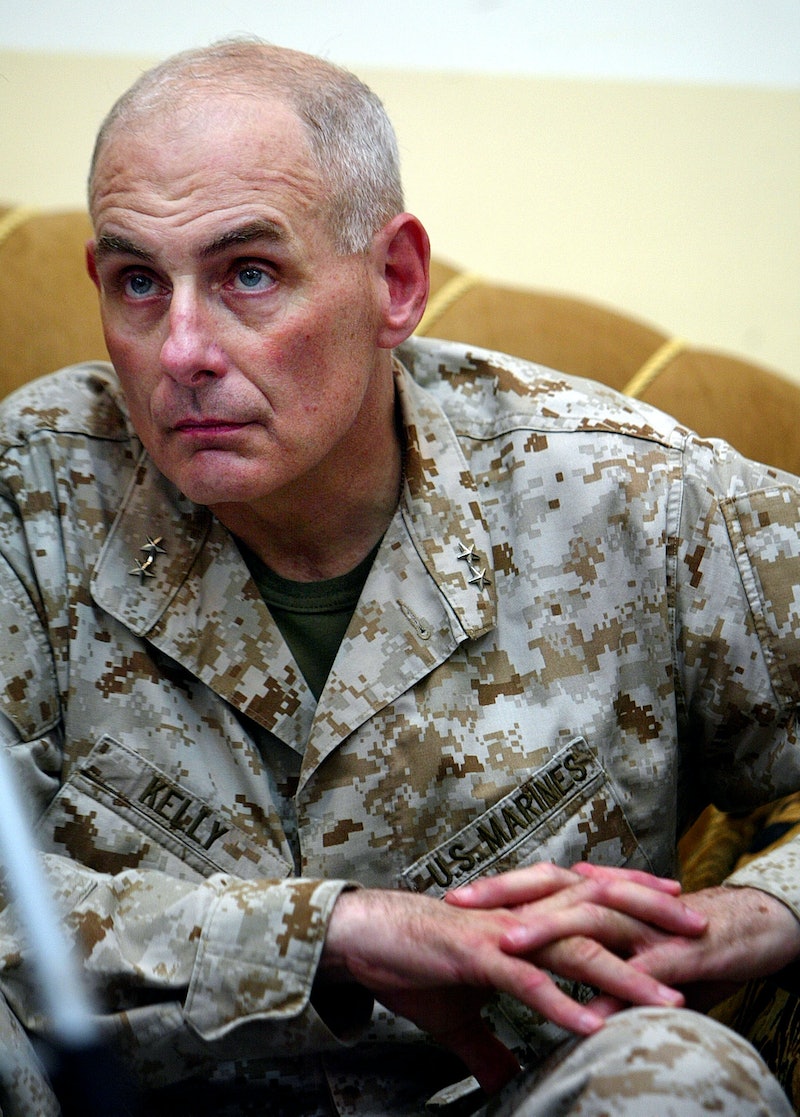 For a man with a strictly civilian background, President-elect Donald Trump has shown a real penchant for working with former military leaders. Trump has chosen retired Marine Gen. James Mattis to be Secretary of Defense, and tapped Lt. Gen. Michael T. Flynn as his national security adviser. And now, Trump will add retired Marine Gen. John Kelly to his administration, nominating him to head up the Department of Homeland Security (DHS). And these quotes from Kelly show how he fits Trump's idea of "tough," which is probably a good thing to Trump.

Gen. Kelly has spent several decades serving in the military, first enlisting in the Marine Corp. back in 1970, earning an officer commission six years later. After serving multiple tours in Iraq, Gen. Kelly went on to become a military aide to both Robert Gates and Leon Panetta, during their respective stints as Defense Secretary. Most recently, Gen. Kelly was appointed as Southern Command Chief, a job that made him responsible for overseeing countries to the south of the United States: Central America, South America, and the Caribbean. This particular background was a likely factor in Trump's final decision to nominate Gen. Kelly, since he has firsthand experience dealing with issues on the southern border. (Trump's signature campaign promise was to crack down on illegal immigration, and build a wall between Mexico and the United States.)

To get a feel for the policy outlook and perspective of Gen. Kelly, here are six of quotes that show how tough he is on the issues:

1. Current Border Security Is Not Enough

Gen. Kelly believes more needs to be done to secure the land border between the United States and Mexico. In testifying to Congress, Gen. Kelly stated, "The border is, if not wide open, then certainly open enough to get what the demand requires inside of the country." Gen. Kelly also added, "Terrorist organizations could seek to leverage those same smuggling routes to move operatives with intent to cause grave harm to our citizens or even bring weapons of mass destruction into the United States."

It seems Gen. Kelly shares many of Trump's fears about insufficient border control, which suggests he will support Trump, should the president-elect follow through on his campaign promise to build a wall.

While working for the Obama administration, Gen. Kelly was not afraid to disagree with the president's desire to close down Guantanamo Bay. In fact, Gen. Kelly asked for $200 million to rebuild and renovate the Cuban prison for captured terrorists, as well as the housing for military personnel stationed there. During congressional testimony in 2013, Gen. Kelly offered his understanding of why Guantanamo prisoners had engaged in a hunger strike, stating "they had great optimism that Guantánamo would be closed. They were devastated when the president backed off — at least their perception — of closing the facility." Neither does Gen. Kelly think there is any problem with how Guantanamo Bay is run,

3. He Displayed Good Judgment In Iraq

In his book Victory in Iraq: How America Won, the former House Representative Duncan L. Hunter researched the role Gen. Kelly played in the 2003 attack on Baghdad. According to Duncan, Gen. Kelly insisted to his fellow soldiers that their mission was to take the city, not "kill a lot of mothers' sons." Duncan also relates an anecdote of Gen. Kelly's reaction to a surrendering Iraqi general. After being offered the Iraqi's pistol, Gen. Kelly handed the man his own gun. According to Duncan, the message was "The war is over. Time to rebuild."

Though Gen. Kelly initially supported the push for female entrance into military combat roles, he has since backed away from those views, citing concerns that standards would have to be lowered to accommodate female soldiers. "If we don’t change standards, it will be very, very difficult to have any numbers — any real numbers come into the infantry, or the Rangers or the SEALs, but that’s their business.”

5. On Guantanamo Bay Prisoners Who Return To Terrorism

Gen. Kelly gave his frank outlook on those detainees released from Guantanamo Bay who return back to terrorist organizations. “If they go back to the fight, we’ll probably kill them. So that’s a good thing.”

While other military figures weighed in or endorsed a candidate, Gen. Kelly kept out of the fray, saying that whether Clinton or Trump won, they should know they weren't "getting anything but the absolute best military advice, completely devoid of politics.”

These six quotes are just a few examples of how tough Gen. Kelly is, which makes him the right choice for Trump's "tough guy" Cabinet.