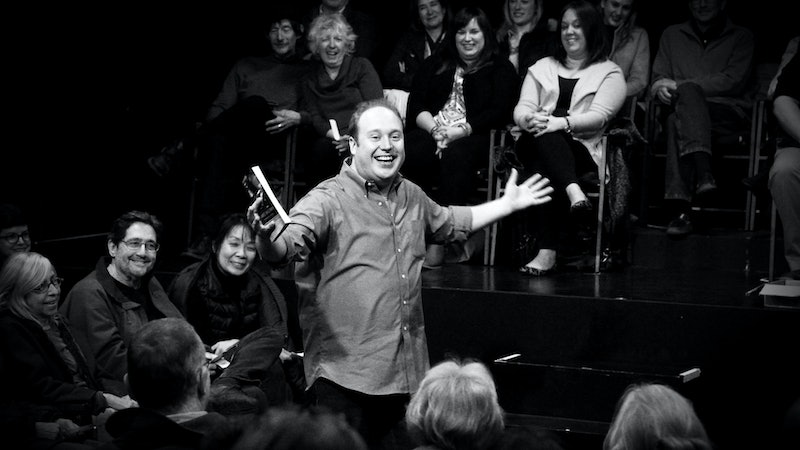 With only about three weeks left in the year, I think we can all agree that 2016 was a rough one. The past 12 months gave us the deaths of many beloved celebrities, the refugee crisis in Syria, the Zika virus, the Dakota Access Pipeline fiasco, the Pulse nightclub shooting, the "alt-right," Brexit, Harambe, and a polarizing new president-elect. (And that's just the shortlist.) So if you find yourself sorely in need of some cheer this holiday season, then look no further than HBO. The trailer for Every Brilliant Thing — the network's new special airing the day after Christmas — highlights how this special broadcast will be the perfect antidote to a seemingly crappy year.

The HBO special was filmed during a performance of the one-man play of the same name, performed off-Broadway by British comedian Jonny Donahoe during the winter of 2014-'15 to much acclaim. According to Ben Brantley's 2014 review of Every Brilliant Thing in The New York Times, the play is about a man "who describes growing up with a suicidal mother, who first tries to kill herself when he is 7." He continued,

At that time, he begins compiling a list of the greatest sources of pleasure in life, leaving itemized pieces of paper for his mother to find. … Our narrator maintains that list throughout his youth. And it sustains him through watersheds that include not only subsequent suicide attempts by his mother but also his going to the university, falling in love for the first time and setting up his own home.

There's also an element of audience participation to the endeavor, which it looks like HBO has captured in its filming of the play. The items on the list "correspond to identically numbered notes that are distributed by Mr. Donahoe among the audience before the show," according to Brantley. "And when he calls out a number — say, five — the designated audience member is required to respond with what is written on his or her note. (For five, it’s 'things with stripes'; mine, No. 999,997, was 'the alphabet.')"

But Every Brilliant Thing isn't just blindly cheerful in defiance of all good sense, either. "If you live a full life and you get to the end of it without once feeling depressed, then you probably haven't been paying attention," Donahoe can be heard telling the audience in the trailer. But as Brantley wrote, the play "is fully aware of the gravitational pull of the darkness that beckons the narrator’s mother and speaks to him as well. In the face of great loss and depression, a real effort of will is required to recall why it’s worth continuing with life." And if that doesn't sound like a message we all could probably benefit from hearing right now, I'm not sure what does.

More like this
'Doctor Who’s New Star Is Already Huge On TikTok
By Maxine Harrison
What’s New On Netflix: A Victoria Justice Rom-Com & The Return Of David Letterman
By Arya Roshanian
A 'Bridgerton' Star Just Dropped A Major Hint About Joining The Live-Action Barbie Cast
By Bustle UK
What Does Michael Peterson’s Family Think Of 'The Staircase'?
By Arya Roshanian
Get Even More From Bustle — Sign Up For The Newsletter