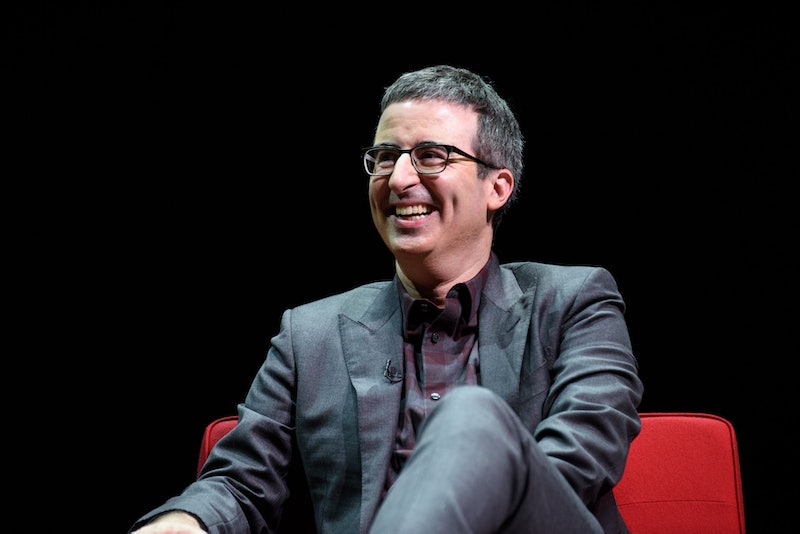 John Oliver had a final message for this dumpster fire of a year: F*ck you, 2016. In what might be the most cathartic message ever, Oliver closed his weekly HBO show, Last Week Tonight, with a segment asking people what their least favorite part of the year was, a question that prompted a staggeringly long list of responses. It ended with a glorious montage of celebrities and people on the street looking into the camera and telling 2016 to f*ck off once and for all. The segment was hilarious, but also painfully true. Here are seven times John Oliver was right about "f*ck 2016," because if there was ever a year that deserved to be erased from the history books, it's this one.

Amid the common struggles of just trying to live (one person said in the Last Week Tonight segment that 2016 was terrible because his girlfriend of three years broke up with him), 2016 offered a string of terrible-horrible-no-good-very-bad events across the globe. I'm sure we all have a laundry list of awful personal tales from the past year, but for the purposes of this (relatively very short) list of grievances with this year, I'll stick to the bigger atrocities that 2016 had to offer.

Although contaminated water in Flint, Michigan, has been an ongoing issue, things really seemed to come to a head in 2016. By the end of 2015, Flint was declared a state of emergency, and investigations into the unsafe drinking water began. But the situation had a very 2016 ending: House Republicans closed the investigation in December and offered basically no new details about the string of failures at all levels of government that led to the crisis. Back in April, Oliver teamed up with Elmo and other Sesame Street residents to try and explain that lead in water supplies is bad news. If only lawmakers could understand that.

Oh, good Lord, what is there to say about the election? (Oliver, for his part, has said a lot about the election.) It was dirty. It was ruthless. It was long. And because it insists on never letting us move on, there have been recent revelations that Russia tried to influence elections results in favor of our president-elect.

The images coming out of Aleppo, once known as the jewel of Syria, are devastating. As the Syrian government increased efforts to oust rebels in the eastern part of the city this year, the violence has once gotten worse and more people have been displaced from their homes. According to data from the UN High Commissioner for Refugees (UNHCR), there are some 4.8 million Syrians who have lost their homes.

From the Istanbul airport bombing to attacks in Nice, France, and Orlando, there were dozens of high-profile terror attacks in cities around the world. Sometimes, it felt like there was a new tragedy every day. Terrorism across the globe and in our country shook us to the core and broke our hearts.

As if figuring out what to believe about 2016 isn't hard enough, the rise of fake news made it even harder. Fake news stories that were widely circulated on Facebook weren't just things with a political slant — they were straight up lies. Fake news became so pervasive that PolitiFact gave it the "Lie of the Year," and Oliver went as far as to say that the "fake facts" from "micro-targeted media" handed Trump the election.

Cute portmanteau, bad situation. Brexit, or Britain's exit from the European Union, shocked the world over the summer when Britain voted to leave. Although it's weathered the initial shock, the pound is currently at a 30-year low. If there was one positive from the whole situation, it's that it inspired a glorious rant from Oliver in which he lectured the U.K. that there are "no f*cking do-overs."

Yes, I had the election earlier, but it was more than just Hillary Clinton losing or Donald Trump winning. The disappointing, rise of Donald Drumpf, as Oliver calls him, may be the epitome of the anger and sadness of 2016. Even though he didn't win the popular vote (in fact, he appears to have lost it by close to 3 million), his ability to appeal to millions of Americans says a lot about the sorry state of our country.