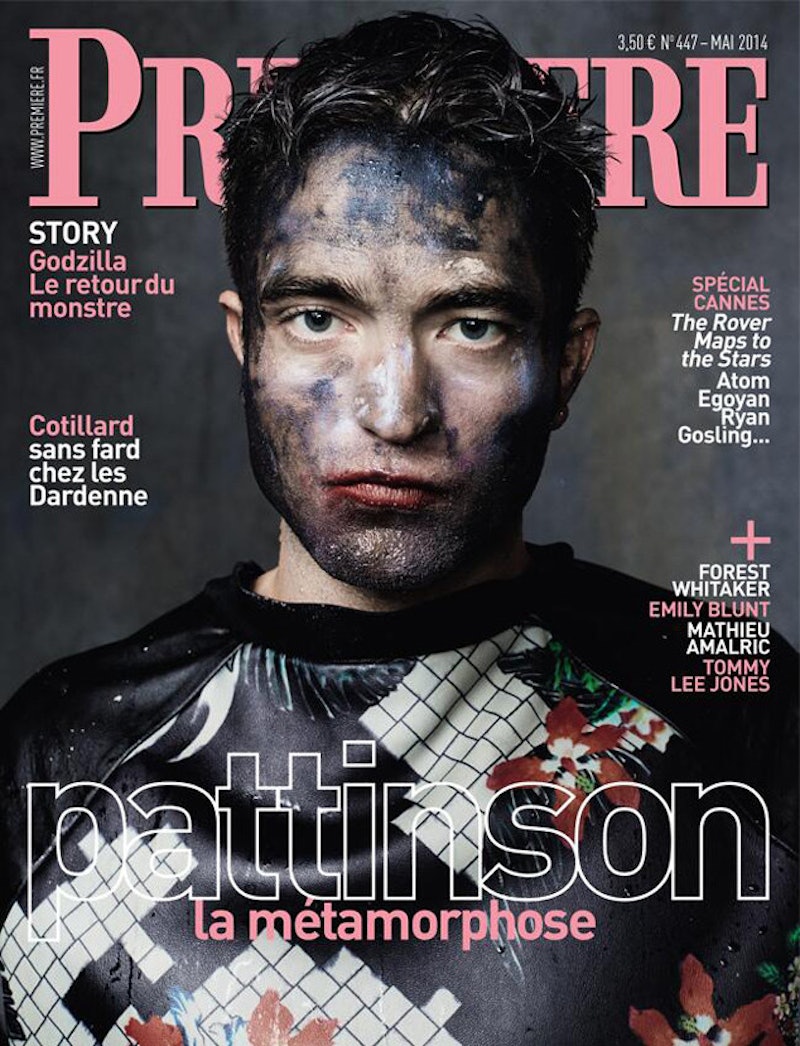 My grandmother has never trusted the French, and, after what they did to Robert Pattinson on a magazine cover, I can see where she's coming from. When I first viewed this Première cover, I thought he was appearing to promote "Godzilla: Le retour du monstre," but no, the only monster returning was Pattinson's makeup artist. Instead, Pattinson is all dusted up to promote his films Rover and Maps to the Stars; both will appear at the Cannes film festival after it kicks off on May 14. You can watch the trailer for Maps to the Stars here, with the door closed and blinds pulled down.

Upon further perusal, the cover starts to make more sense. It declares, "Pattinson: la metamorphose," which is clearly a reference to the Franz Kafka novel in which the protagonist [spoiler alert] transforms into a giant insect. Yes, Pattinson has arguably made the difficult shift from teen romance superstar in Twilight and Harry Potter to gritty real-world actor, but I think this article will focus more on the extra legs that are about to start sprouting from his sides. Why else would he look, as Tobias Funke might say, as if he just "blue" himself? Here are some other possible excuses for the travesty that is his face:

If the world is overrun by flesh-eating monsters, you can bet the outbreak will spread from France. This is the May issue of Premiere, and they clearly snapped this picture just as Pattinson was beginning to moulder. If you estimate that the fever from an infected bite burns a person out within twenty-four hours, and take into account how many fans have been infected in their quest for an autograph, there should be zombies with feet on the ground in the United States in approximately five and a half hours.

2.) His Little Sister Did His Makeup

She looks pretty put-together here, but Lizzy Pattinson, 25, is clearly still in the grips of an all-consuming sibling rivalry. Why else would the singer tell her brother, "Hold still, I'm going to make you beautiful," before smearing their mom's old lipstick and eyeshadow all over his face?

The same disease that's turning Katy Perry's hair green is taking its toll on Pattinson's forehead and cheeks, turning his once-pale skin into a blue mockery of its former self. While this unidentified skin and hair disease clearly has different effects on its victims, it lends truth to the reports that Perry and Pattinson have been secretly canoodling for the past few months.

Let's be honest. The Blue Man Group has been hounding Pattinson to audition ever since the promotional posters for Twilight were released. He immediately fit their two main criteria, which are: 1) must have symmetrical jawbones and 2) must be able to move under a heavy layer of face paint.

5.) He Told the Makeup Artist to Make Him Look Like a Sad Clown

Katy Perry strikes yet again. Seriously, is anyone else struck by this touching homage to Perry's "Birthday" character Kriss the Clown? Pattinson is Kriss plus Picasso's blue period, dipped in a vat of tar.

Unbeknownst to many, Pattinson is very close with the stars of Duck Dynasty. They went through a rough spot in December when Phil Robertson was banned after insulting Dumbledore's sexual orientation, but the two men realized that, more than anything else, they just love shooting ducks.

Bear with me, folks. I included the Mary Poppins song "Jolly Holiday" because it sparked my preadolescent class awareness. "Mom," I inquired, "Why does Mary tell Burt his blood is blue?" I would later learn that all deoxygenated blood runs blue, but before that, I learned that aristocrats supposedly had blue blood. How much more noble is Pattinson, then, if he even his sweat and skin follicles are blue! (Side note: if you listen to the lyrics of this song, you'll notice that Mary Poppins is actually friend-zoning Burt the entire time. Maybe his blood isn't the only thing that's blue.)

From zombies to Katy Perry to owning his pedigree, there are a number of reasons that Pattinson could have ended up the way he did on the Premiere cover: smeared like a child's finger painting. At the end of the day, however, it's nice to know that his career is continuing to blossom even as the blush of blood has long since faded from his pallid cheeks.

And, if any fans take umbrage with the cover, we can always blame the dastardly French.