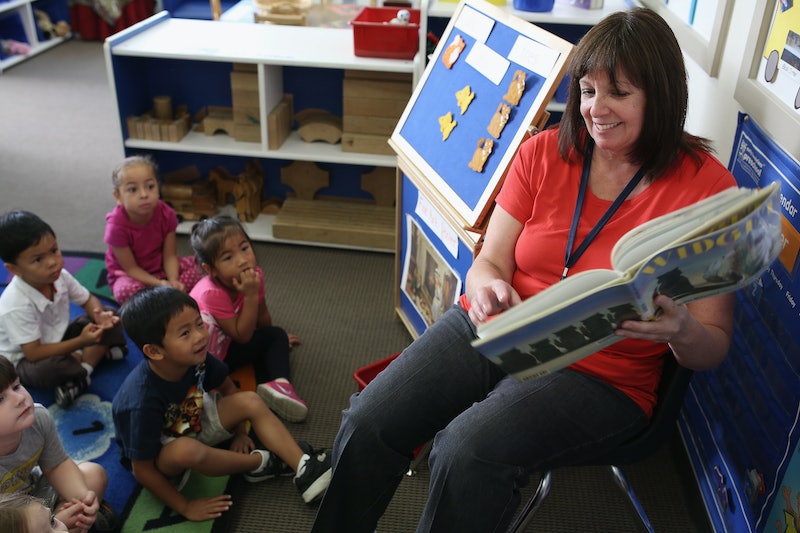 We tend to think of public schools as fairly diverse places, but it seems at least one aspect of the public school system is remarkably non-diverse, namely: the teachers. A new study shows that over four out of five public school teachers are white, even though half of all public school students are children of color. So that's pretty clearly less than ideal.

And this is a problem for several reasons. For one thing, this disparity might contribute to the way in which students of color are disproportionately punished in schools. For instance, black and Native American students are expelled far more often than white students, though data shows they are no more likely to misbehave. So is this due to the fact that most of their teachers are white? It's impossible to know for sure of course, but it seems likely that hiring more teachers of color might lessen the problem.

Then, of course, there's also the fact that hiring more teachers of color gives students role models they can more easily relate to. As Kevin Gilbert of the NEA’s executive committee notes, it's much easier for students to believe in their own potential than "when they can look and see someone who looks just like them, that they can relate to" who has also succeeded. “Nothing can help motivate our students more than to see success standing right in front of them," he adds. Failing to hire teachers of color deprives students of this opportunity.

Ulrich Boser, the author of the Center for American Progress report, also adds that it's not only students of color who can benefit from more diverse teachers. "Even in a place like North Dakota, where the students aren't particularly diverse relative to the rest of the country, it's important for our social fabric, for our sense as a nation, that students are engaging with people who think, talk and act differently than them but can also be just as effective at raising student achievement in the classroom," he said.