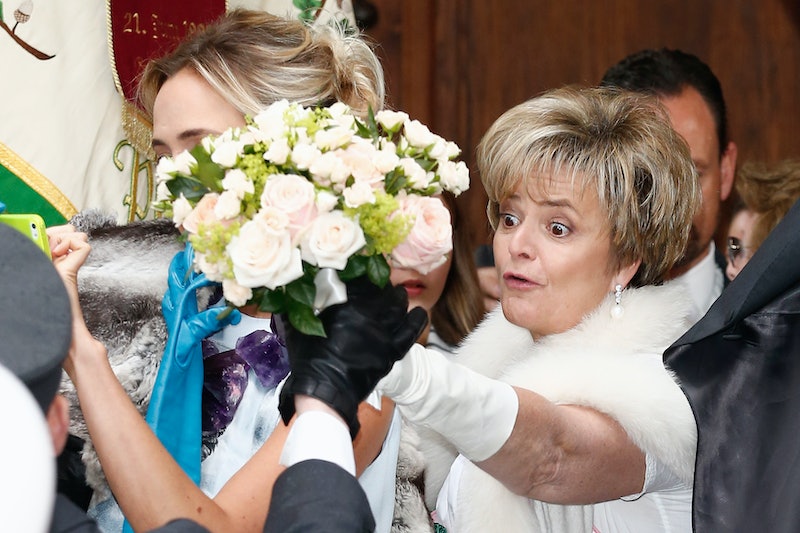 If you were to ask your peers what they want out of marriage, they might express a hope for a progressive, gender-equal union. Indeed, by some accounts, a majority of young men and women alike report that they hope to enter egalitarian marriages in which both the husband and wife participate actively in earning money, caring for the home, and raising children. But unfortunately, when the rubber meets the road, it's often just too difficult for everyone to do everything in a marriage — and new research shows that men's and women's "fallback" models for marriage differ greatly.

In an admittedly small survey, sociologist Kathleen Gerson polled 120 heterosexual men and women from age 18 to 32 on how they would want their families arranged, if an egalitarian partnership were not possible. As it turns out, at least these men and women differ greatly in their opinions:

Men’s most common fallback position is to establish a neotraditional division of labor: 70% would hope to convince their wives to de-prioritize their careers and focus on homemaking and raising children. Women? Faced with a husband who wants them to be a housewife or work part-time, almost three-quarters of women say they would rather be self-reliant and able to support their kids on their own, even if this means divorcing or not marrying.

In other words, a majority of polled men are still into essentially traditional relationships, and a majority of polled women would sooner parent and breadwin alone than do so in the context of a male-headed household. Yikes! If these results are at all representative of Americans at large, no wonder new marriages are floundering.

Feminists have championed egalitarian relationship ideals for some time now, but the message seems to have stuck more for women than for men, and unevenly throughout social classes. As the author of another article on marriage in America recently pointed out, "the bitter irony is that those most likely to disdain female breadwinners (the least educated men and women) would be helped the most by dual-earner households. The men who want to be breadwinners are very often the ones least able to fill that role." This sure is a recipe for unfulfilled lives, if I ever heard of one.

But old social norms die hard. There isn't really any way of changing them quickly from the top-down without negative unintended consequences, like encouraging women to go it alone as single moms because their babies' fathers have poor life prospects and marriage would potentially raise their taxes while jeopardizing their benefits. The institution of marriage may be regrouping around intensive parenting, instead of around gendered division of labor, but that's happening much more rapidly for the upper classes in America than for the lower ones.

How can we strike a public policy balance between the gender-progressive lip service Americans pay towards marriage, the gender-related feelings they still have in their guts, and the needs of dependent children both present and future?