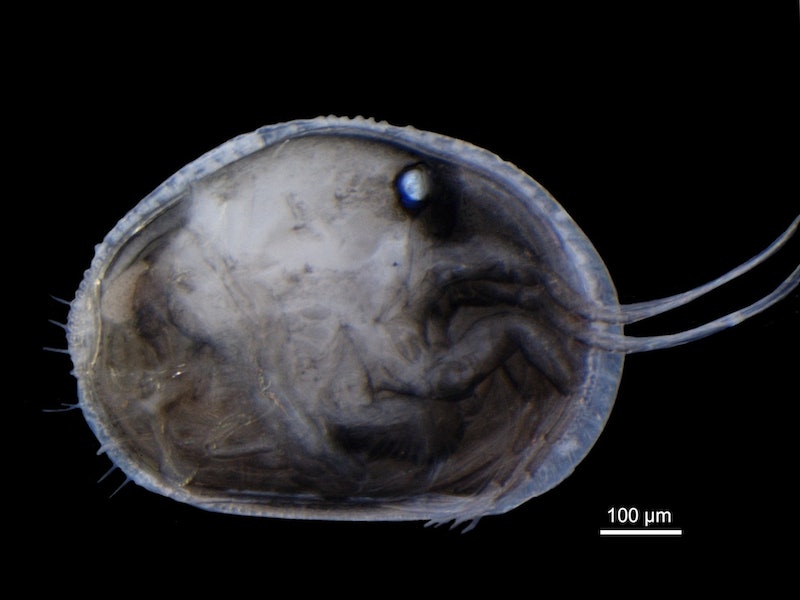 The latest finding from Australian scientists proves that size doesn't matter in the animal kingdom: What really counts is your sperm. Researchers from the University of New South Wales in Australia have discovered the world's oldest sperm preserved in fossils from tiny shrimps, and it's every bit as gross as you think it would be. The remains of the ancient mussel shrimp sperm are 17 million years old, and not only are they bigger than the bodies of those freshwater crustaceans, they were preserved in bat feces.

The discovery, detailed in the journal Proceedings of the Royal Society B, was made in a cave inside Australia’s Riversleigh World Heritage Fossil Site in northern Queensland. The location has provided some unexpected surprises before, such as giant, toothed platypuses and flesh-eating kangaroos, but experts believe they hit the scientific jackpot with this one. Professor Mike Archer of the UNSW School of Biological, Earth and Environmental Sciences says these are the oldest fossilized sperm "ever found in the geological record."

The ancient mussel shrimp, or ostracod, was only a millimeter in length, but its sperm measured nearly 10 times the size of its body. It's pretty impressive and simultaneously terrifying, since it was coiled up inside those tiny bodies. We could only imagine the terrors of giant, human sperm, which would have to measure more than 55 feet to match up with those of modern-day ostracods.

It's rare that the animal's soft tissue was kept in tact for such a long period of time, though it was largely due in part to "the steady rain of poo from thousands of bats in the cave," according to researchers. Kudos to those nocturnal creatures, whose droppings may hold the key to nearly-perfect preservation.

Essentially, the preserved ostracods were caught in an act of ancient sex, since the fossilization seemed to have occurred right after the deed was done. Present-day ostracods still produce giant sperm and their reproductive organs function in a similar manner compared to 100 million years ago.

However, they're not the only animals that boast larger-than-life sex cells. In line with the idea that big things come in small packages, a fruit fly called Drosophila bifurca has coiled sperm measuring more than 2 inches long if straightened out. To put it in perspective, these reproductive cells are 1,000 times longer than human sperm, and would compare to a man's sperm stretching across a football field.