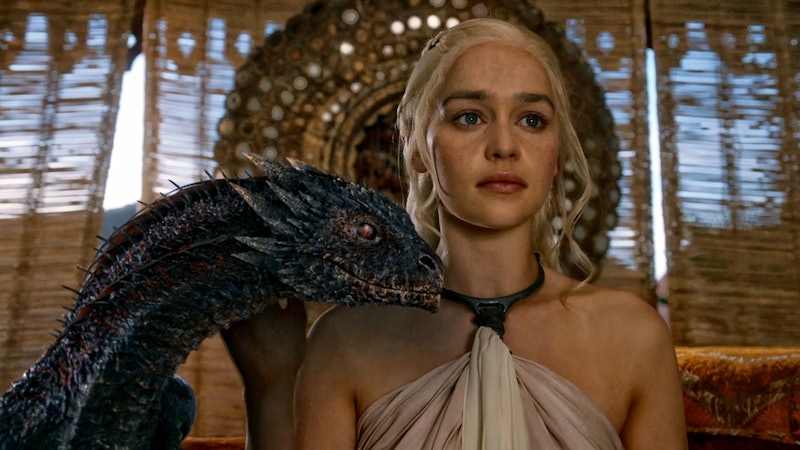 You know when you were a kid, and your teachers or your parents were like, "A... is for apple, B... is for banana... C... is for cupcake?" Well, now you can learn the alphabet with Game of Thrones . Okay, I'm sure this isn't supposed to be for kids to learn the alphabet; it's just some really great artwork depicting how vast the world of Westeros is. Hell, there's at least a character for every letter of the alphabet — literally. Even the obscure X ... it's for Xaro Xhoan Daxos (remember him? That fool messed with Danaerys!). It's proof that Westeros is epic in nature.

But it's also fun to look at this artwork and imagine playing one of those "alphabet games" you might have played as a kid during long car rides. Like, let's list actors from A to Z! Foods! Countries! ... Game of Thrones characters, most of whom are guilty of doing something pretty amoral! And then it's even more fun to imagine a school learning the alphabet via Game of Thrones. "J is for Jaime, who did something horrible to his sister Cersei, and by the way, he only has one hand! But the showrunners are trying to make him win our hearts again..."

Regardless of all of that, it's actually pretty fun to look at — the artwork is quite impressive, and it's also interesting to see which characters share the same first letter of their name, as the juxtaposition is pretty thought-provoking, even if it's incidental. Like the ill-fated Ned Stark is next to Nymeria, the most loyal direwolf, and Tyrion is next to Theon, and those two couldn't be more different. Check it out below: