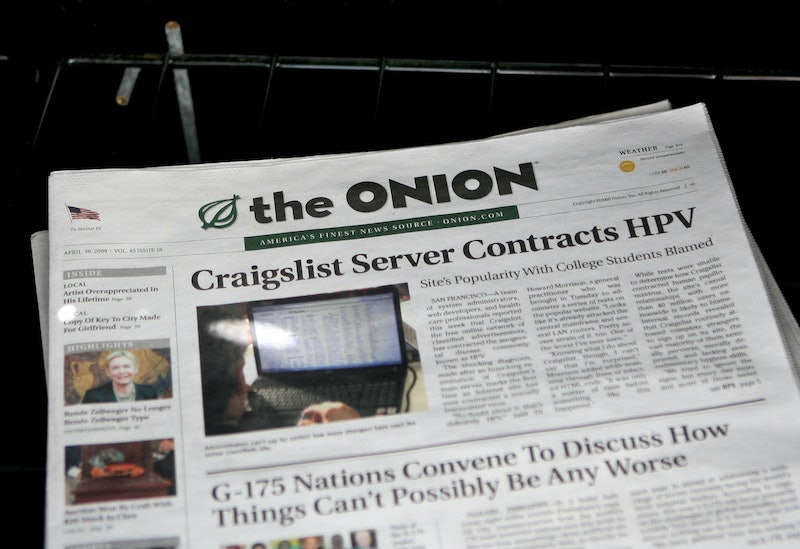 In 2010, the Onion published an article about President Obama supposedly sending off a "rambling, 75,000 word email" to everybody in the country. As with everything the Onion publishes, it was satire — 75,000 words would be about 150 pages. But the satirical element was somehow lost on the good folks at Fox, who went ahead and republished the joke article as if it were actual news (the classy operation it is, Fox News reacted to the embarrassment not by publishing a correction, but by deleting the article and pretending it never existed).

While it's easy to make fun of Fox for this, it's not all that uncommon for people to mistake the Onion for actual, real-life news. Everybody from the New York Times to the People's Republic of China has done it. Sometimes, it simply leads to embarrassment and public shaming; other times, it results in the police getting involved. This is all a testament to the quality of the Onion's satire, the gullibility of humans, and — perhaps most importantly — the utter insanity of the world we live in.

Indeed, it’s getting harder and harder to tell what’s actually news and what’s from the Onion — so hard, in fact, that we bet you can’t tell the difference between the two, either.

"The app is exclusive for Applebee’s customers who are at the restaurant at the same time. The app uses iPhone location services to determine whether the users are currently inside an Applebee’s or are within 100 meters of one. Once a user is out of that coverage area, they can no longer chat up anyone who’s in the restaurant."

ROUND 2: GENDER SEGREGATION IN CONGRESS

"To better educate lawmakers on complex reproductive issues while also providing a safe, nonthreatening environment where they can speak up and ask questions without feeling self-conscious, the U.S. Senate’s 100 members were separated into male and female groups Thursday afternoon prior to arguments on S.1696, the Women’s Health Protection Act."

Answer: As far as we know, Congress didn't actually do this. (Yet.)

"A press release from Aging Analytics UK, a company that conducts research on biotechnology and regenerative medicine, made two announcements this morning: first, that they’ve launched an new A.I. tool called VITAL (Validating Investment Tool for Advancing Life Sciences); and second, that they’ve licensed VITAL to Hong Kong V.C. firm Deep Knowledge Ventures, where the tool will become an “equal member of its Board of Directors."

"Right now, it’s looking like tonight’s record $500 million Powerball drawing could be canceled as embarrassed lottery officials have admitted: They lost the balls."

"President Obama cannot seem to shake the mounting rumors that he does not love his dog, Bo. It started three weeks ago on right-wing message boards speculating on why President Obama was so rarely photographed with the Portuguese water dog given to the first family in 2009."

"The singer has offered to give the couple approximately $47,000, a portion which reportedly represents four months of his 2014 profits from a pornographic film that he made with Kim Kardashian."

Answer: Ray J did indeed do this.

"The well-documented and steadily increasing gap between the rich and poor has come to the fore as the hot-button issue that all congressional candidates will be dodging at town halls, in televised debates, and at voter meet-and-greets in 2014,” said political analyst Rebecca Diemer, noting that both Democrats and Republicans were already holding meetings with top aides and focus groups to strategize the best way to brush aside the subject before they hit the campaign trail."

Answer: While a lot of politicians probably will avoid talking about income inequality, this is an Onion article.

ROUND 8: STUDENT AND TEACHER VYING FOR SAME JOB?

"Noting that it would be nice to finally have a little spending cash on hand, both Pittsfield High School junior Marissa Klemp and chemistry teacher Rebecca Murphy applied for the same seasonal waitress position at a local diner, sources confirmed Thursday. “Right now, I’m borrowing money from my family half the time, so even picking up a few dollars here and there would be great,” said the 16-year-old Klemp."

Answer: We wouldn't be surprised if something like that happened at some point, but this was satire.

"A police commissioner in a predominantly white New Hampshire town says he won't apologize for calling President Barack Obama the N-word, and he sat with his arms crossed while angry residents at a meeting called for his resignation on Thursday."

Answer: Unfortunately, this one is real.

More like this
How The City Healed Five Years On From The Manchester Arena Attack
By Ella Glover
How To Protect Your Digital Privacy If You Need An Abortion Post Roe v. Wade
By Kaitlyn Wylde
The Church Of Scotland Votes To Allow Same-Sex Marriages
By Sam Ramsden
Photos Of Boris Johnson Drinking At A Downing Street Lockdown Party Have Surfaced
By Bustle UK
Get Even More From Bustle — Sign Up For The Newsletter