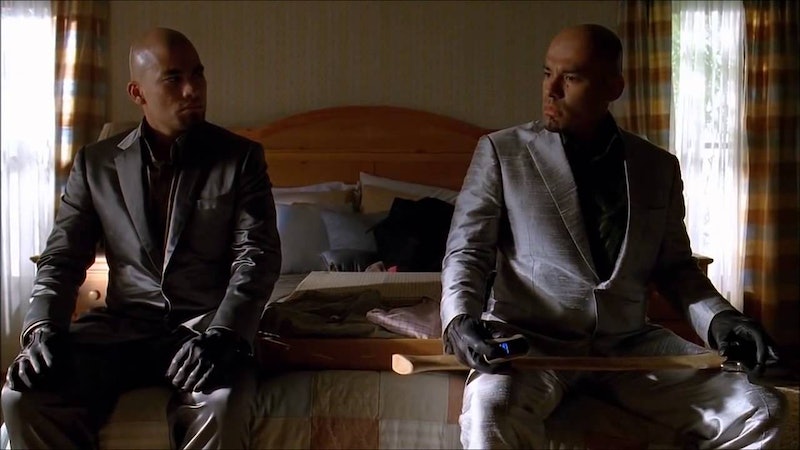 So, there's a chance that those terrifying cousins from Breaking Bad may be joining Better Call Saul. Those scary hit men who barely spoke are super recognizable — those smiles, er, lack thereof — couldn't be missed anywhere. How do we know all of this is possible? Well, one of the actors, Daniel Moncada tweeted a pic of himself along with Breaking Bad show runner Vince Gilligan in Albuquerque, New Mexico.

There's a chance they may just be hanging out and not filming, of course. Perhaps Moncada, who played Leonel Salamanca of those dangerous Salamanca cousins, was in New Mexico and figured he'd say "hey" to an old co-worker. But the fact that he landed in the exact place where Breaking Bad, and likely Better Call Saul, takes place makes me think he'll be on the show. And what's more is that the Salamanca cousins could easily be tied to Saul in his younger days, as could pretty much anyone, which is one of eight billion reasons why Better Call Saul will be a joy for Breaking Bad fans to consume come November.

Only one of them tweeted a pic with Vince Gilligan, so who knows if Luis Moncada will be back, or if we'll see any at all. Who knows, maybe this is just another teaser for Better Call Saul. Then again, these guys often show up without warning and without a word....

Here is Moncada with Gilligan... and he's not smiling.