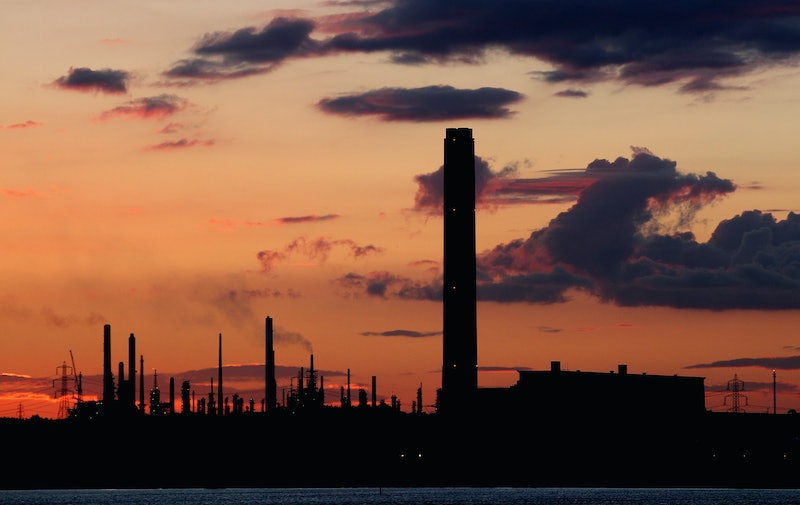 With Monday's big environmental news — the announcement of the EPA's plan to cut carbon emissions by 30 percent by 2030 — U.S. politics have also been thrown a curveball. This is especially true of the Democratic Party. While the Republicans have little to do but sit back and attack the EPA's plan, pushed by President Obama amid the GOP's intransigence on climate issues, the Democrats have to decide whether to play offense or defense. Or, indeed, whether to tow the party line at all. (Looking at you, Allison Lundergan Grimes.)

It's an especially precarious position for Democrats because, as was the case with the Affordable Care Act, this proposed emissions cut is a solid 16 years from reaching fruition... if everything went perfectly. With legal challenges surely coming from Republican-controlled and coal-producing states, that's far from certain. And while it's absolutely essential to take climate change seriously, recent research has suggested we're already past the tipping point, that accelerated rates of global warming have essentially doomed the Earth to staggering sea level increases in the next several hundreds of years. As such, the EPA's new efforts on this front may be a matter of too little, too late, with a heaping side of political vulnerability.

So, how precisely is this all going to shake out? Here are three possible ways the EPA's move could impact Democrats come November.

1. The Democratic Coalition Could Splinter Apart

This wouldn't be such an unusual position for the Democratic Party come election time — competing to win elections in broad, varied political climates, there are always going to be some nominees in statewide races who can't, won't, or don't play ball on mainstream party policy. Texas Democratic Gov. candidate Wendy Davis stoked discord when she said she'd support a 20-week abortion ban if it didn't come paired with the TRAP laws designed to shut down clinics contained in the bill she famously filibustered, for example.

In no area is this red/blue state divide more pronounced than on matters of the environment, and more specifically, the arm of the federal government coming in to regulate how much one can pollute. There's maybe no better example of this than the campaign ad West Virginia Democratic Senator Joe Manchin filmed back in 2010, in which he shot the Democrats' cap-and-trade carbon emissions bill with a rifle.

This top-down regulatory effort is likely to spur similarly defiant protests from within the party itself, weakening any impression of a unified front, and making it all the easier for Republicans to paint them as disordered and chaotic. Which is not the look they want.

2. The Republicans Could Have a Second Thing to Talk About

Until this point, the rallying cry for Republicans with elections looming has been a very familiar one: Obamacare is a dysfunctional travesty, so let's repeal it. It's clearly a pie-in-the-sky dream, until such a time as they control the Congress and the White House — President Obama isn't going to sign a repeal of his own signature achievement, after all.

But there's some recent indication that wind may be leaving those sails, with campaigning Republicans subtly backing-off the strident fire-breathing they'd been engaged in in months and years prior. The U.S. Chamber of Commerce (which is not a government agency, but a conservative business-interest lobbying group) has cut separate ads for Kentucky Republicans Sen. Mitch McConnell and Rep. Garland Barr displaying this softer tact, eschewing full repeal for "fixing" the whole "Obamacare mess."

Being able to pivot to the EPA's plan, which figures to be politically divisive within Democratic ranks while Republicans could likely oppose it in lockstep pretty easily, could be a big boon in light of this. After all, it's backed by the President, it's federal regulation, it's an end-around on their congressional powers, and it shows concern for the long-term health of our climate. In other words, it's a virtual "Republicans hate this" checklist.

3. The Plan Could Fail, Losing Both the Battle and the War

A non-negligible risk in all this is that the distant timeframe of the EPA's plan leaves Democrats no guarantee it'll even be standing in one piece by the time 2030 rolls around. The new rules on emissions are being asserted by the EPA under a seldom-used provision of the Clean Water Act, a bit of regulatory creativity which the courts will surely have their chance to look at.

This doesn't necessarily mean the courts are likely to rule against the EPA — they've been on something of a winning streak of late — but it does mean there's a risk that the Democrats could be sacrificing their electoral prospects, thus imperiling the climate through Republican-controlled government, to try to champion an effort that could get cut down anyways. Such an outcome would clearly be a worst-case scenario, both for Democrats, and for the environment writ large.