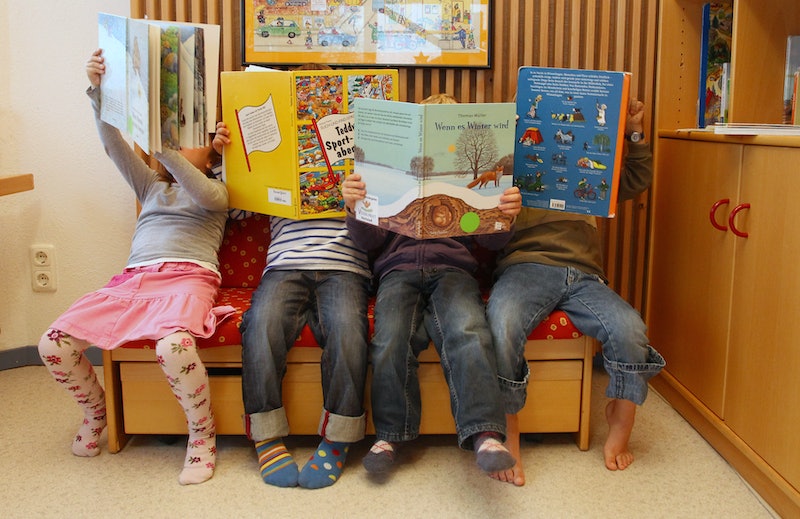 If you're in your mid-twenties like me (and keep racking up reminders of how old you're getting), then here's one more: Some of the classic children's books you grew up with are now turning 50. These five books were all published in 1964 — not the biggest year for adult lit, but an amazing one for children's books. Where the Wild Things Are had just come out the year before, and the '60s in general are seen as the start of the modern shift in children's literature from being completely sanitized to more brutally honest. As Maurice Sendak said, "I'm not going to bullshit [kids]."

These books got away with stuff that likely wouldn't fly now (Veruca Salt being sent down the "bad" egg chute to almost certain death, anyone?). PC or not, they've all stood the test of time and still regularly appear in pop culture, even a half-century later.

1. CHARLIE AND THE CHOCOLATE FACTORY BY ROALD DAHL

Perhaps the most well-known Roald Dahl book, Charlie was inspired by Dahl's experience serving as a taste-tester for Cadbury as a schoolboy and hearing about the actual spies that the candy company employed to steal thier competitors' secrets. Even though Dahl wrote the screenplay to the movie, the changes the director made reportedly “infuriated” him — he thought the movie put too much emphasis on Willy Wonka and not enough on Charlie. But real Roald Dahl fans know it’s all about Charlie and the Great Glass Elevator.

Ian Fleming is best known for his 11 James Bond novels, but he also wrote one children’s book while recovering from a heart attack (and he unfortunately did not live to see it published). The Disney movie version, which is arguably the creepiest kid’s movie of all time, was very loosely based on the book—pretty much all they have in common is the flying car. And guess who wrote the screenplay? Roald Dahl. Guess he didn't mind changing the plot when it wasn't his book.

Besides instilling in me a crippling fear of being crushed by my bulletin board, this classic picture book has also inspired the award-winning Flat Stanley Project, which encourages kids to mail out their own Flat Stanley and write about his adventures in a faraway place. Mr. Obama himself is a fan, often sending replies to kids who mail their Stanleys to the White House.

4. HARRIET THE SPY BY LOUISE FITZHUGH

In an essay for the New Yorker, Jezebel founder Anna Holmes compares Scout Finch to Harriet M. Welsch, calling them “two of the most important American examples of enlightened, audacious girlhood.” Holmes suspects that Fitzhugh was influenced by To Kill A Mockingbird, which was published just four years earlier. Harriet's spunk has gotten her a place in many banned book lists and a top spot in our definitive ranking of the 25 coolest heroines from children's literature.

5. THE GIVING TREE BY SHEL SILVERSTEIN

Well before he wrote his first collection of poems, Where the Sidewalk Ends, Shel Silverstein published a simple story of unconditional love. But some find The Giving Tree to be downright depressing, including one Mr. Ryan Gosling, who called the book “the worst” and “so f*cked up” in a 2010 interview with Vulture. Hey girl, I just want to read you my favorite contemporary feminist theory.

More like this
The Viral 'Little Miss' Franchise Is Focusing On Mental Health Next
By Darshita Goyal
I've Read The Harry Potter Books 30+ Times & This Plot Hole Haunts Me
By Kelsey Stiegman
The Biggest Differences Between 'Bullet Train' & The Book It’s Based On
By Arya Roshanian
10 Must-Read New Books Out This Week
By K.W. Colyard
Get Even More From Bustle — Sign Up For The Newsletter