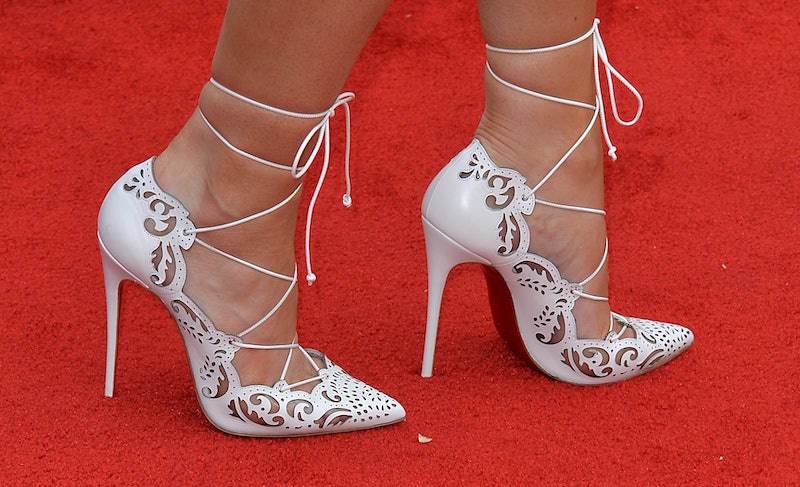 Could you imagine living in a world where you were banned from wearing high heels that were higher than a tiny kitten heel? Me either and the thought alone is actually quite horrifying — my feet are already cringing. Well, if Oleg Mikheyev, a member of Russia's parliament, has it his way that will be a dreadful reality. Mikheyev is trying to ban high heels in Russia, writing that “Footwear should have heels that are two to four centimeters high, five centimeters high at the most," according to the Agence France-Presse. For shoe lovers everywhere that thought is just not acceptable. I repeat that is just not acceptable.

Allegedly, this has nothing to do with wanting to make sure women fit a certain image when they hit the town — Mikheyev claims he's actually concerned for people's feet. In his five page proposal he wrote, “The harmful effects of wearing extremely high heels and flat shoes have now been recognized by experts of the entire world. It's time to change this trend." While wanting to protect society's feet is a nice gesture, I think this regulation idea is a bit extreme, and smells suspiciously anti-feminist. Keep your laws off my shoe rack, Russia! It should be every high heel lover's own choice of whether or not they want to protect their feet by swapping their stilettos for ballet flats. So what if I have massive bunions when I'm 80? Style is pain, as they say, and I have a right to ruin my feet in the name of a hot outfit if I wanna.

The proposal is already causing quite the stir in Russia and according to The Times of India, some women said if high heels are banned, they will start wearing them on purpose. You go, chic women of Russia.