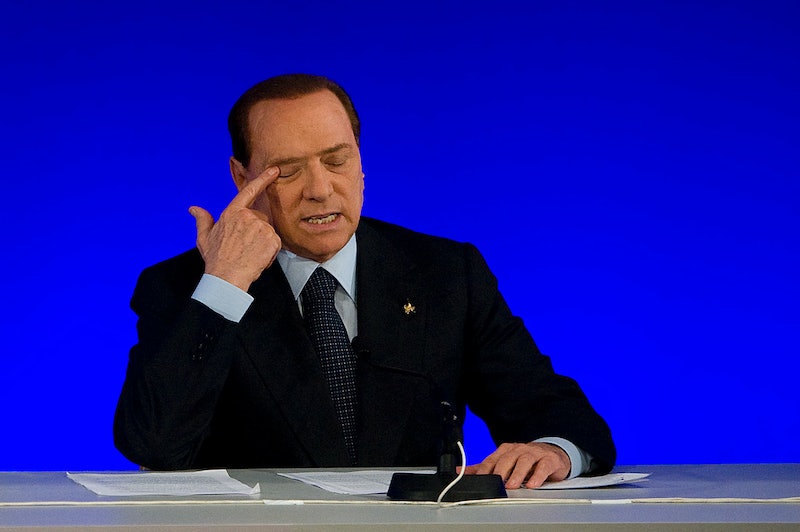 Following a three-day hearing, Italy’s highest court confirmed a one-year prison sentence for Silvio Berlusconi on Thursday. The decision confirmed an earlier conviction that Berlusconi had evaded roughly €7millon ($9m) in taxes between 2002 and 2003 during his time as prime minister.

This is the first time Berlusconi has been formally convicted of any crime. Previous cases brought against him over the past 20 years include tax evasion, buying judges, and embezzlement. But for all those cases he was either acquitted on appeal, or the statute of limitations ran out.

However, Thursday's ruling does not necessarily mean that he'll be sent to jail. Given his age, 76, Berlusconi seems more likely to face house arrest than a prison sentence, according to experts. For Berlusconi to be imprisoned or placed under house arrest, though, the same appeals court that convicted the former prime minister must also formally request his arrest. In addition, a Senate committee must vote on whether he must resign from public office. He is currently a senator and leader of the center-right People of Freedom Party (PDL).

And this isn't even the end of Berlusconi's legal troubles. Appeals are still pending in two other cases in which he was convicted: having paid for sex with an underage prostitute, and publishing the transcript of a leaked wiretap in his family newspaper, Il Giornale.

In a 9-minute video statement following the decision, Berlusconi said the trial and conviction "had nothing to do with reality" and "deprives me of my freedom and political rights."

More like this
Why Eurovision 2023's Host City Won’t Be Revealed For A While Yet
By Sam Ramsden and Rachel Mantock
Dr. Anna Pou Is Still Practicing Medicine After Facing Murder Charges
By Brad Witter
'Children of the Underground' Subject Faye Yager Now Runs A North Carolina B&B
By Brad Witter
Anthony Templet Wants To “Live Normally” After Killing His Father
By Brad Witter
Get Even More From Bustle — Sign Up For The Newsletter