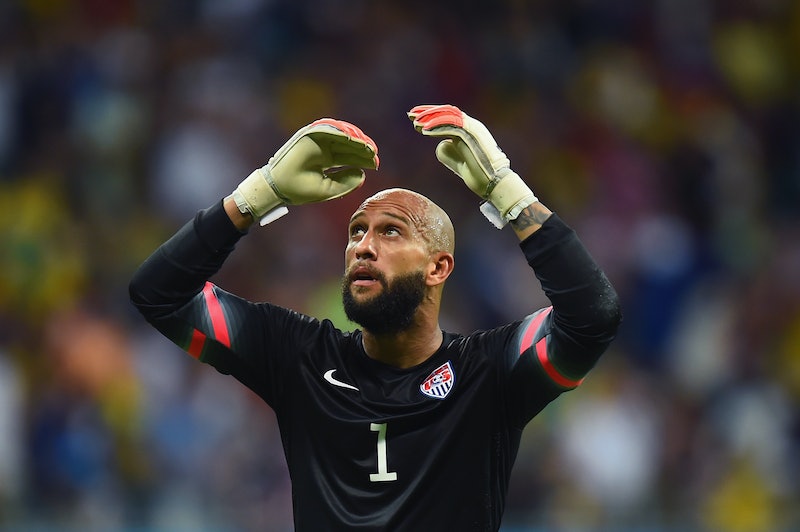 As the World Cup rages on there are a number of big questions swirling around the heads of those observing. "Who's gonna win this game?" "Who's gonna win that game?" "Why do we let America participate at all when they can't even get the name of the game right?" — you know the drill. One of the smaller — but nonethless intriguing — questions at play, though, has to do with American player Tim Howard's facial hair. For example: How did he settle on that particular shape? What is his grooming regimen? And what does Tim Howard look like without that beard?

As a Daily Beast headline declared recently, "Team USA Lost, But Tim Howard Is A Winner." They assert that Howard was integral in carrying America through their time at the World Cup — and part of the reason Americans seem to be caring about soccer at the moment. And though his hair was not as Illuminati-tastic as, say, Cristiano Ronaldo's, his facial hair still made a visual mark. In other words, expect at least one soccer bro to be rocking a felt version of it come Halloween.

Surprisingly, Howard does not evaporate into a whiff of sweat once you take his beard away from him. In fact, he functions just fine. See for yourself:

More like this
Lewis Hamilton Turned Down A Role In 'Top Gun: Maverick' For This Surprising Reason
By Darshita Goyal
Harper Teasing David Beckham’s Dad Dancing Is Beyond Adorable
By Frances Stewart
13 Photos Of Formula 1 Racers Charles Leclerc & Carlos Sainz That Will Drive You Crazy
By Radhika Menon
The 12 Best US Open Tennis Outfits Of All Time
By Avery Matera and Dominique Norman
Get Even More From Bustle — Sign Up For The Newsletter