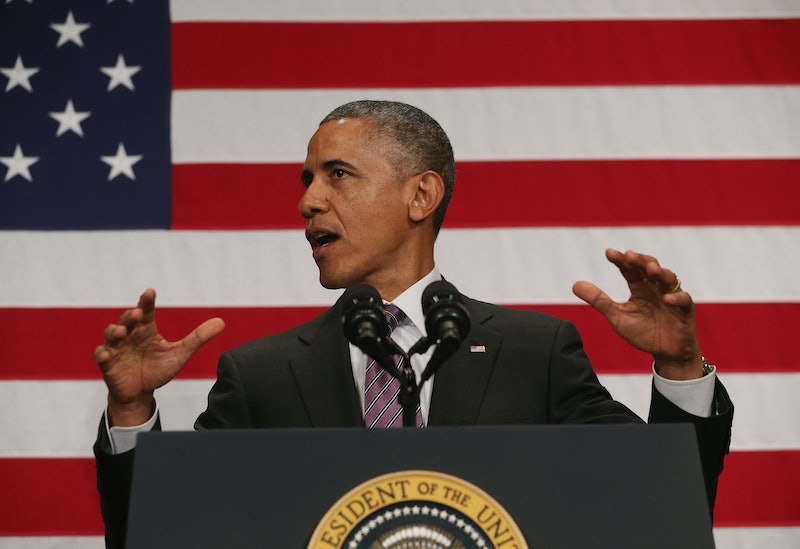 Last Thursday, President Obama predicted that the GOP will eventually move away from the far-right extremism that it’s embraced in the last couple of years. “I think over time the Republican Party will move back to the center, mainly because if they don't, they'll never win the presidency again,” Obama told American Public Media's radio show Marketplace. This is a very Obama-esque thing to predict, as the president has long been hopeful — often without good justification — that the Republican Party will become a sane political entity someday.

Should the GOP ever become a rational political party again, it very well could be because of raw electoral calculus, not because the party itself values rationality. Still, given President Obama’s inexplicable tendency to view the GOP through rose-colored glasses, this was an uncharacteristically blunt assessment for him to make.

It’s always refreshing to hear a politician speak curtly — even if it does come across as brusque, harsh or, as in this case, crassly political — simply because it happens so infrequently. And it's especially satisfying when we hear such bluntness from Obama, who has been known from the beginning for his lack of political gaffes and generally restrained approach. Of course, Obama has had a couple of unvarnished moments — let’s have a look at some of his bluntest comments.

In fall of 2013, House Republicans gleefully shut down the government, refusing to open it until Obamacare was repealed, defunded, or at least damaged in some way. A few weeks later, having accomplished none of those objectives, they shrugged and reopened the government. Obama was not pleased (to say the least) and to vent his anger, he told the GOP rather directly what they should do if they want to have an effect on government policy.

“Go out there and win an election,” Obama said.

Timed as it was — less than a year after 2012, a terrible electoral year for Republicans — the comment was particularly cutting.

This isn’t the only time Obama has unabashedly rubbed his electoral success into the GOP’s face. During negotiations over the stimulus package in 2009, Obama had a two-word response to congressional Republicans who wanted more conservative policies included: “I won.” Soon thereafter, during a debate with Republican leaders over the Affordable Care Act, he responded to Senator John McCain’s criticisms by curtly noting that “the election is over.”

Months after Obama took office, an old professor friend of his, Henry Louis Gates, was mistakenly arrested by police while trying to jimmy open the door of his own apartment. While the mistake was quickly cleared up, it brought the issue of racial profiling to the forefront of public discourse for, oh, a week or so, and during that week, Obama reflected on what it might have been like if he’d tried to break into his new home at the White House.

It played well as a joke, but like any good joke, there was a seed of truth to it. Some interpreted it as a bleak acknowledgement that even ascending to presidency doesn’t protect a black American against racial profiling. Unsurprisingly, the Right criticized him for the comment, branding it “race-baiting.”

At another point during the 2008 campaign, Obama was asked about his lagging support amongst rural, blue-collar Democrats in the midwest. He gave a response that would have been perfect coming from, say, a political science professor, or perhaps a campaign ad consultant. But coming from a man who wanted to be president, it came off a tad crude.

You go into some of these small towns in Pennsylvania, Ohio— like a lot of small towns in the Midwest, the jobs have been gone now for 25 years, and nothing's replaced them. ... [e]ach successive administration has said that somehow these communities are going to regenerate. And they have not. So it's not surprising then that they get bitter, and they cling to guns or religion, or antipathy toward people who aren't like them, or anti-immigrant sentiment, or, you know, anti-trade sentiment [as] a way to explain their frustrations.

While there may be some accuracy to that assessment, it sure sounded as if Obama was dismissing an entire slate of political beliefs as nothing less than misplaced anger. That’s an intriguing psychological theory, but it’s not the best way to win over rural, blue-collar Democratic voters in the midwest. The right criticized him for the comment, and Clinton ended up winning Pennsylvania and Ohio in the primaries by healthy margins.

On one occasion, Obama spoke his mind freely, without any filter, but in the wrong way — and it came back to bite him. When Obama and Clinton were duking it out for the Democratic nomination in 2008, Clinton was asked during a debate how she felt about reports that voters found Obama more likable than her. Clinton handled the question well, playfully saying that those reports “hurt her feelings.” Obama was considerably less graceful.

The Clinton campaign criticized him for it, and it remains one of the most memorable gaffes of Obama’s career.

“An Ego Bigger Than Mine”

One of Republicans’ most frequent personal attacks on Obama is that he’s arrogant. They’re at least sort of right: Obama reportedly has a very high level of self-confidence, and isn’t afraid to let the people around him know it. In 2011, during the annual Gridiron Club Gala in Washington, the president poked fun at this perception — although, to be fair, he was only willing to do so if it was in the service of teasing Bill O’Reilly.

“I love the press. I even sat for an interview with Bill O'Reilly right before the Super Bowl,” Obama said. “That was a change of pace. I don't often get a chance to be in a room with an ego that's bigger than mine.”

There you have it: Obama actually admitted that he’s full of himself. We’re honestly a bit surprised that the right didn’t criticize him for this.

More like this
What Is The Forest Personality Test? The TikTok Trend, Explained
By Georgina Lawton
Are John Legend & Kanye West Still Friends? The Singer’s Latest Update Is Candid
By Brad Witter
Rishi Sunak's Wife Is Worth More Than The Queen
By El Hunt
Christina Aguilera Took A Powerful Stand At Brighton Pride
By Sam Ramsden
Get Even More From Bustle — Sign Up For The Newsletter