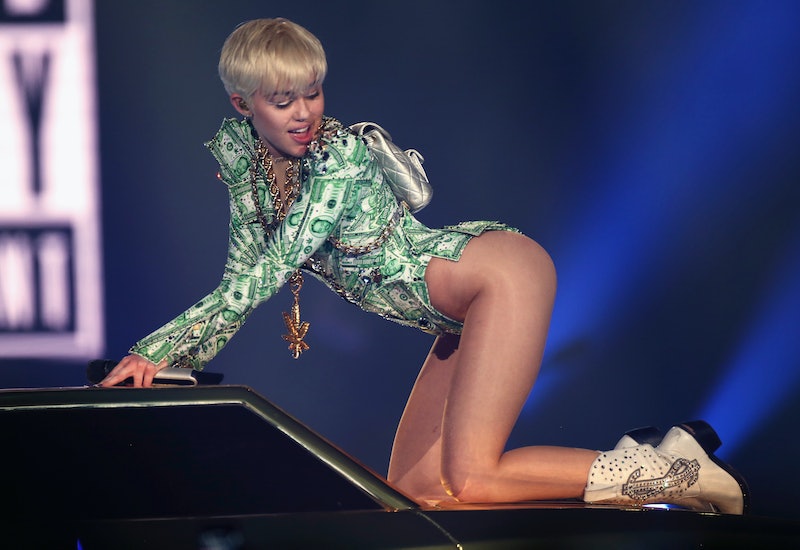 One Direction's Harry Styles found himself in a bit of a pickle after 1D fans, who apparently stalk his Twitter favorites on the reg, discovered something... taboo. Harry Styles favorited a pornographic tweet which got #HarryDontLickAnything trending on Twitter Monday morning. He went on to unfavorite the tweet and favorite a ton of cute kittens and puppies instead in the best PR move that has ever happened. While Styles has clearly moved on from the tweet (the aforementioned adorable animals and an awkward reference to the weather made that obvious), the whole thing did bring to light the fact that with Twitter's redesign, checking out someone's favorited tweets is easier than ever. (Actually, was looking at someone's favorited tweets even an option before? If it was, it was much more hidden.) With Twitter's newest version, looking at favorites just takes one click at the top of a user's page.

For this reason, I decided to take a look around and see what else we could learn by rooting around a celeb's Twitter favorites. What deep, dark secrets would they hold? Who would secretly be addicted to favoriting tweets from fast food joints? Who would favorite only tweets written by the Millionaire Matchmaker? Well, there wasn't anything that crazy to be found, but I did discover that Miley Cyrus' Twitter favorites are extremely positive. One look through them and it's like your read a hundred inspirational Pinterest quotes. Oh, and there are a few favorites about weed. Of course.

Cyrus has 82 favorites altogether. Here's what I found:

She Likes When People Appreciate Her Caring Side

She Appreciates a Good Throwback Photo

She's not embarrassed by her Hannah Montana days, she embraces them. That's the way to live life! (Dancing around on a stage in a high-cut leotard is optional, but it will really drive home any point you're trying to make about growing up.)

She Enjoys When People Appreciate the Details of Her Performances

Hopefully, the person who made the cat animation favorited this one too.

She Has a Thing for Self-Help Books

She Wants You to Know About Adorable Aquatic Pigs

Obviously, this is very important stuff. I'm not being sarcastic. Aquatic pigs are amazing.

A woman after my own heart.

And sometimes favorites her own tweets.

See what I mean? Whether or not you like her, you've gotta admit, she's a very positive person. Can't hate on that too much, can you?