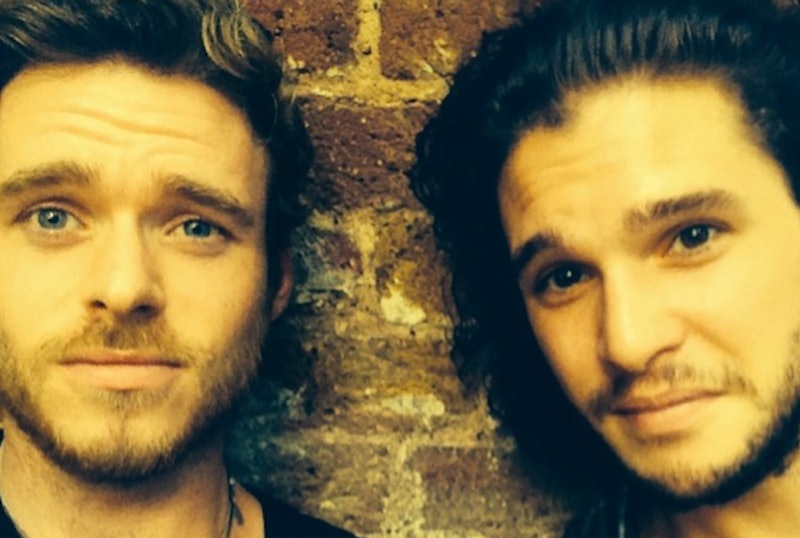 We gotta face it: Game Of Thrones can be a giant bummer. In fact, it's kind of mainly a giant bummer, with epic dragon smackdowns and cathartic regicide interspersed. The bummer is widespread, but it is arguably mainly centered on one family — namely, the Starks and their truly horrific luck. But at least we've got the real world, where none of them are actually dead and where we can pretend Richard Madden and Kit Harrington posting selfies together is just the Stark brothers reunited, and if not happy then at least not dead and/or miserable. You gotta do what you gotta do.

Let's relive a little of what the Starks have been through these past four seasons. [SPOILERS, obviously] Their dad was hella murdered. Their sister's been isolated from the rest of the family while being held captive by the Lannisters. Their other sister's been running around learning how to murder people. Bran's learning how to talk to crows or something. Jon Snow's been up in the icy region fighting zombies. Robb, their mom, and his wife were all hella murdered together in an event that is seriously in the running for worst wedding of all time. They've had a rough go of it.

So let us take a break from all the Stark madness — it's really very stressful — and instead just think about the nice day Robb and Jon's real-life portrayers must have had existing in the same place together and not being dead. They look very awkward, but it's still happier than Westeros:

And here is a bonus of Richard Madden hanging with the Eleventh Doctor: