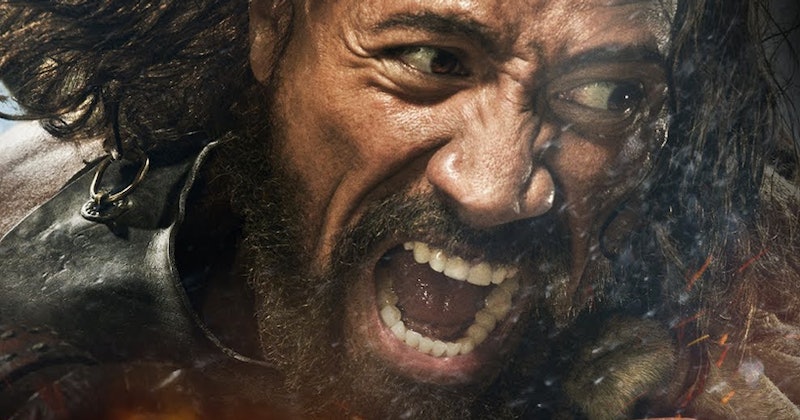 Dwayne "The Rock" Johnson, American treasure, has made it known before that he feels that he was "born to play Hercules." I would suspect, though, that the kid version of The Rock, dreaming of one day donning that infamous loincloth, couldn't have quite imagined everything that role would entail. For example: Hercules' beard was made from yak pubic hair. Yep.

As you can see in the picture above, Johnson is indeed rocking a beard in the upcoming Hercules. And that beard, according to Johnson, was made from hair harvested from the groin region of a yak. As he told Kelly Ripa and Michael Strahan on Live With Kelly & Michael (and lovingly transcribed by Uproxx):

They put so much time and effort into the wigs and the beard, you just can’t believe it. And by the way, I gotta tell you, the beard hair — this is crazy — the beard wasn’t lace, so it had to be put on in strips cut an inch high, a quarter-inch wide, piece by piece. And so I asked my Italian designer, I said ‘Matteo, what is this?’ And he goes ‘Oh, is the hair from a yak.’ And I said oh, the yak, what part? And he’s putting the hair here on my face and he goes ‘Oh, the testicles.’ It’s the softest.

Welp. There you have it. The Rock is very enthusiastic about yak pubes. He was very committed to playing Hercules.

More like this
All The Early 2000s Hairstyles Rihanna Wore In A$AP Rocky's "D.M.B." Video
By Olivia Rose Ferreiro
Penn Badgley & Leighton Meester Met On A Horror Movie Set Before 'Gossip Girl'
By Jake Viswanath
UK Viewers Will Have To Wait To See Jessica Biel’s Killer Housewife Series
By Rachel Mantock
Selena Gomez’s ‘SNL’ Hosting Debut Had Twitter Gushing Over ‘Barney’ & Wigs
By Stephanie Topacio Long
Get Even More From Bustle — Sign Up For The Newsletter