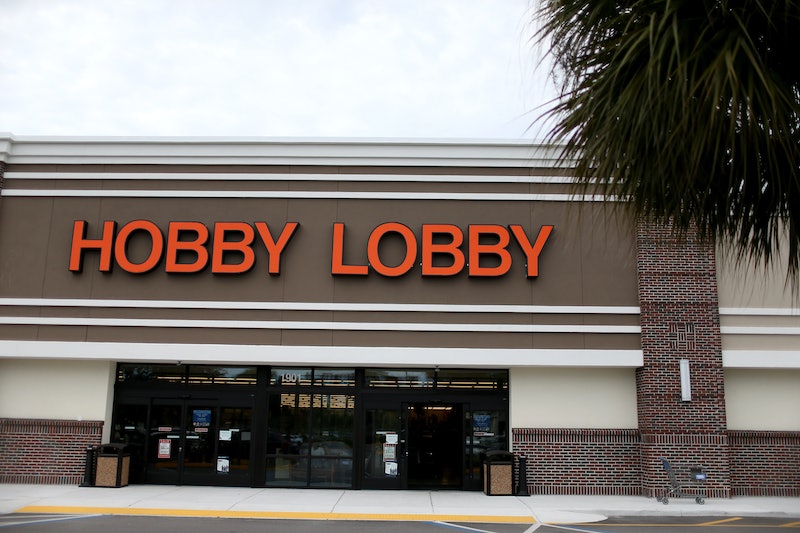 Hobby Lobby is all about the family values, right? You know the ones — respect, morality, low-cost arts and crafts, vehemently refusing to cover contraception in health insurance plans — the standard hits. Well, according to one ex-employee, they talked a better game than they played: She alleges Hobby Lobby lied and fired her over her pregnancy. To be specific, for asking for time off to give birth, something she claims she confirmed with the company months prior that she wouldn't have to fear.

This is just an allegation so far, with no concrete assurance that things played out exactly as the fired employee, Felicia Allen, claims they did. This is important to bear in mind, since obviously, she's charging a sort of indulgent hypocrisy on behalf of the company — birth control no, time off for the birth no, so ... guess you're outta luck, ladies?

Here's the gist of the allegations, as reported by RH Reality Check's Sofia Resnick: Allen claims that she interviewed for and landed a job at Hobby Lobby in 2010, and briefly afterward, she discovered she was pregnant. She says she asked her supervisor if this was going to pose a threat to her job, since she'd only have been working about nine months by the time her child was due.

The Family and Medical Leave Act, signed into law by President Bill Clinton in 1993, would have granted Allen 12 weeks of unpaid leave, and peace of mind that her job would be safe, but the law requires a worker be employed for more than one year to be eligible.

But, Allen claims, she felt better when her supervisor told her that she wouldn't lose her job over the pregnancy, which would be fair, considering the company clearly prefers female workers to be more susceptible to unplanned pregnancy than they might be otherwise.

But then, after giving birth and trying to return to work just three weeks later — for some sad perspective, the U.S. is one of the few countries with no laws assuring paid maternity leave — she claims she got a different answer: You're fired. According to Allen:

I asked her would I lose my job due to me being four months and only having five months before I have my child. She told me ‘no.' I felt like everything was OK. I had talked to my boss, and she let me know that everything would be OK. I would still have my job. ... I was like, I can’t get fired. She can’t terminate me because I have to go have my child. I started asking everybody on the job, ‘Can they do this?’ And even the assistant manager who had just got hired [said,] ‘No, that’s not right.’

But Allen alleges Hobby Lobby's unsympathetic behavior didn't stop there. When she applied for unemployment benefits — a pretty important thing when you've got a newborn baby and no job — she alleges the company fought her claim by fabricating the story of her dismissal, insisting she opted not to take personal leave that was on the table.

How can you be Christian and lie about something to hinder your employee or don’t want them to come back after they’ve had their baby? Or you’re taking up for your manager knowing that they had done the wrong thing. I feel like that’s not being Christian at all. That’s why I don’t even shop there anymore. I used to shop at that store all the time.

Whether Allen's version of the facts is entirely true may not yet be clear, and that might not change — thanks to an agreement she says she doesn't remember signing, she's not allowed to take the company to court, and is confined instead to an arbitration process — one more thing Hobby Lobby and the Supreme Court agree about, as it happens.

But if her allegations are true, this is a gigantic hit to the reputation of a company that's already reviled for its policies toward female workers. Whatever you want to call restricting birth control access for your employees and then firing one for giving birth, it ain't "pro-life."