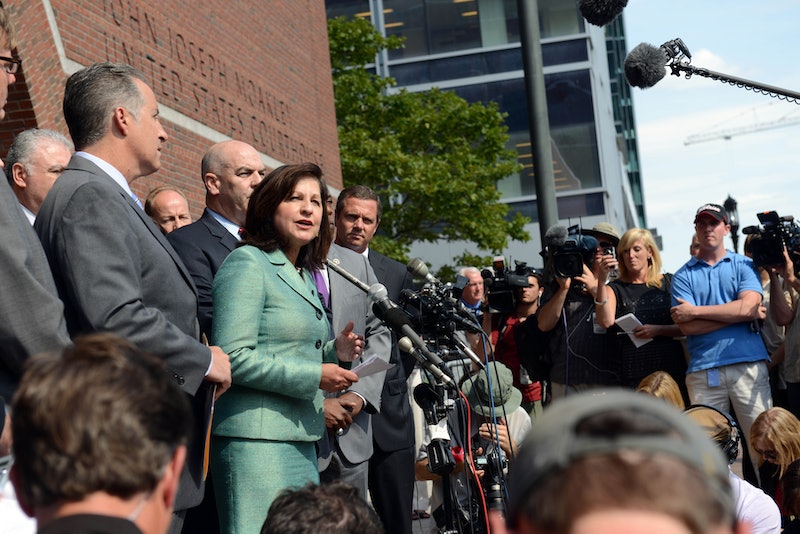 Now that James "Whitey" Bulger has been deemed very, very guilty, jurors are reporting that deliberations behind the scenes were almost as theatrical as the trial itself.

Scott Hotyckey, otherwise known as "Juror #5", said "dissension" ran high as jurors tried to "keep track" of the dozens of charges against Bulger, whose years as the ringleader of the Boston Winter Hill gang brought charges ranging from racketeering — to strangling a 26-year old woman with his bare hands. Hotychkey characterized the 32 hours of deliberation as full of "slamming doors... People leaving. People wanting to get off the jury.”

The jury panel eventually found Bulger guilty on almost every count including 11 of the 19 alleged murders – a.k.a., enough to lock him up for life, but not enough to satisfy the families of all the victims in question. Some reportedly wept in the hallways.

Hotyckey says he was convinced by the 70 witnesses called to the stand: “To me, it seemed like he was pretty much obviously guilty of all the charges,” he said during an exclusive interview with Boston's CBS Station. “It seemed to me that this organization existed, the Winter Hill organization.”

But it may not be time to turn off the TV sets just yet. What happens now that Bulger has been stripped of his guns, cash, and, er, credibility? ESPN says the oh-so-convicted Bulger has one more fight left in him: He's apparently very concerned about what will happen to his 1986 Stanley Cup ring.

More like this
A New Netflix Doc Will Explore The Unsolved Murder Of Jill Dando
By Sam Ramsden
This First Look At 'The Gold' Shows Jack Lowden In A Whole New Light
By El Hunt and Sam Ramsden
The 3 Best Heated Steering Wheel Covers
By Margeaux Baulch Klein
Kim Kardashian’s Son Saint Had This Unique Request From The Tooth Fairy
By Alyssa Lapid
Get Even More From Bustle — Sign Up For The Newsletter
From hair trends to relationship advice, our daily newsletter has everything you need to sound like a person who’s on TikTok, even if you aren’t.