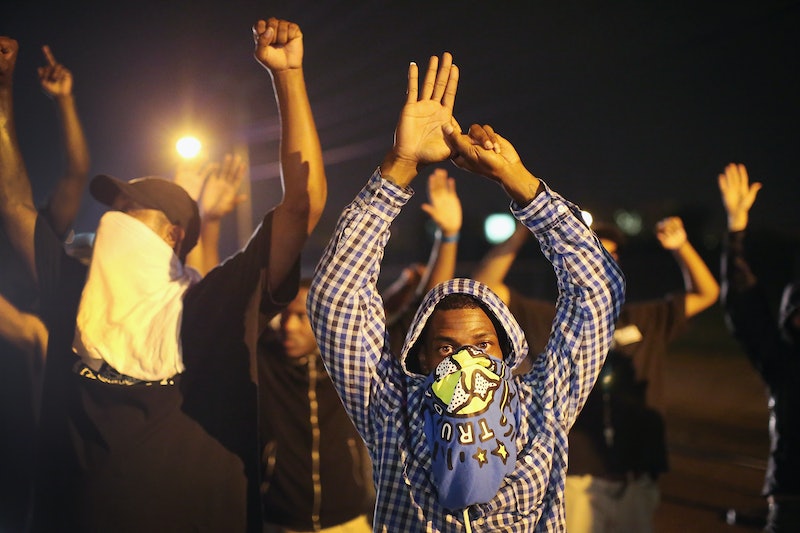 The tragedy in Ferguson, Missouri, might have more answers soon. The Justice Department authorized a second autopsy of Michael Brown's body on Sunday at the request of Brown's family. Although the St. Louis County medical examiner's office already conducted one autopsy, the "extraordinary circumstances" of the case prompted Attorney General Eric Holder to authorize this second, independent autopsy. The original procedure concluded that Brown did, indeed, die of gunshot wounds, but no further details were released. The second autopsy won't actually invalidate the first, though, and both will be taken into account in the department's official investigation of the death.

The announcement came just hours after seven people were arrested for violating Ferguson's new midnight curfew. One person was also shot and critically wounded in that time, and tear gas was used even on people following curfew (though police claim that was because they needed to disperse the crowd to get to the gunshot victim). The continuing unrest caused Missouri Gov. Jay Nixon to appear on several networks Sunday to explain authorities' next steps. "All of us were thunderstruck by the pictures we saw, I mean, the overmilitarisation, the MRAPs rolling in, the guns pointed at kids in the street," he told ABC News. "All of that I think instead of ratcheting down, brought emotion up."

Nixon also took the opportunity to criticize police for releasing security-camera footage showing Brown apparently stealing a box of cigars from a shop. Nixon voiced his opinion that the release of the footage was intended to turn public opinion against Brown. "I think it had an incendiary effect," Nixon told CBS's Face the Nation on Sunday morning. "When you release pictures and you clearly are attempting to besmirch a victim of a shooting, shot down in his own street . . . then properly, there was a lot of folks that were concerned about that."

On yet a third news show Sunday, CNN's State of the Union, Nixon straightforwardly said that prosecutors must ramp up their investigation into the crime. St. Louis County Prosecuting Attorney Robert McCulloch, Nixon said, is "an experienced prosecutor and this is his opportunity to step up." But some people have problems with the choice of attorney: McCulloch is reportedly sympathetic to police officers, which could certainly be a major problem in this case. Still, Nixon has faith in the process, which will hopefully be sped up by the Justice Department bringing in 40 extra investigators to do interviews. "To get justice it has to be transparent justice," said Nixon. "It has to be thorough justice."