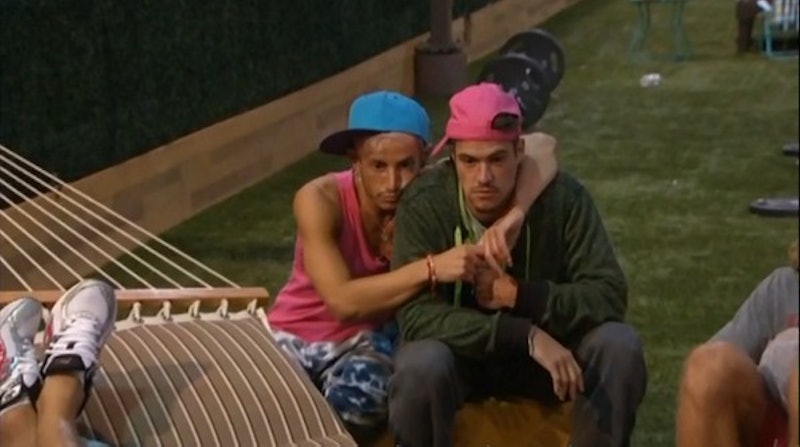 The legions of fans who ship Big Brother 's Zankie showmance have known for a while now that it was coming to an end — if it hadn't already. Frankie and Zach had both betrayed each other before and gotten through it, but when Frankie used the Power of Veto to take Caleb off the block and replace with him Zach, the showmance of the season was done. Yet somehow, even after seeing all of that, Zankie 'shippers were dealt one final blow on Thursday night that still stung. After Zach was evicted in a unanimous vote, he took to the stage to sit down with Julie Chen. And that's when it happened.

After the usual game talk, Julie finally asked Zach about what we were all waiting for: Zankie. She said it might just be one of the greatest showmances in Big Brother history, which made Zach instantly perk up. When she asked me what it was really like, all it took was one word to crush our dreams: "friendship." He said it was a great friendship and complimented Frankie. Come on, Zach. At least call it a bromance, something that at least suggests the possibility of romantic love.

Of course it might not really be over. Maybe Zach was just playing it cool since he's out of the house now, and doesn't want to get his hopes up about how Zankie will fare in real life. Frankie did say in his goodbye video that he can't wait to see Zach again, so maybe that friendship will blossom into something more once they're united. Absence makes the heart grow fonder, right? Plus, Frankie has $15,000 in Team America money, that's more than enough to take Zach on a beautiful date that will sweep him off his feet.

So as much as that "friendship" remark hurt, try not to lose hope, 'Zankie shippers. It's going to take more than multiple betrayals, an eviction, and physical separation to kill this showmance.