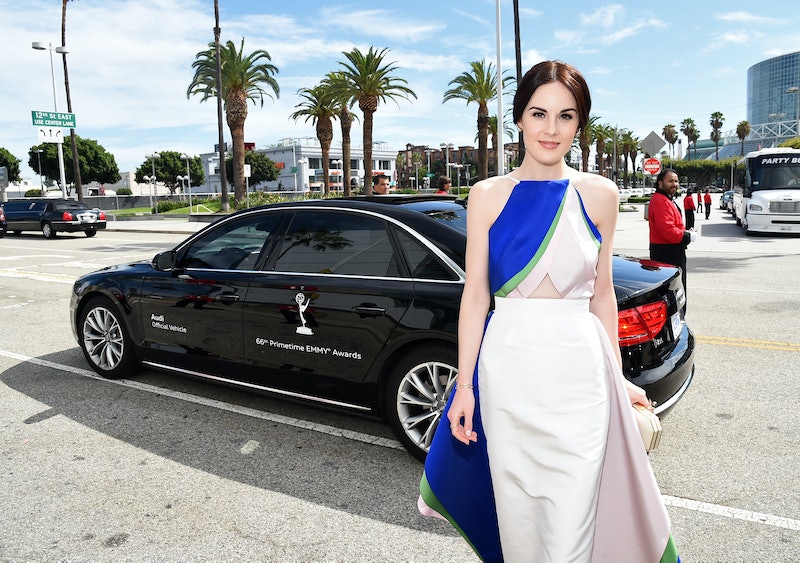 I'm more than familiar with Michelle Dockery's hit-or-miss fashion endeavors, but the Downton Abbey star's latest look rides the fine line between elegant and snore-inducing. Clad in Rosie Assoulin for the 2014 Emmys red carpet, Dockery struck an unexpectedly understated note with her pink, blue, and green dress. The look harkens back to the silk columns of the '60s, but without a bold shade to make the dress pop, the look appears more like a delicately folded silk flag as opposed to a couture red carpet ensemble.

Dockery let her dress do the talking, keeping her updo low and her makeup subtle. Pearl-embellished ear cuffs peeked out from beneath her coiffure, complemented by several thin silver bangles and a statement cocktail ring. Anyone who is familiar with Dockery's style will recognize the actress's penchant for unusual neckline's in this halter-esque gown, a feature which is further highlighted by the daring triangle of stomach displayed above the waist of her skirt.

Indeed, there is nothing overtly unattractive about the dress; in fact, it looks very much like the type of stately gown Dockery's Downton character Lady Mary would wear in the modern age. However, given the stunning looks Dockery has demonstrated on red carpets past, I was dreaming that the actress would show up in a more exuberant look. At the very least, Dockery does look like the prim ruler of the Emmy Universe.