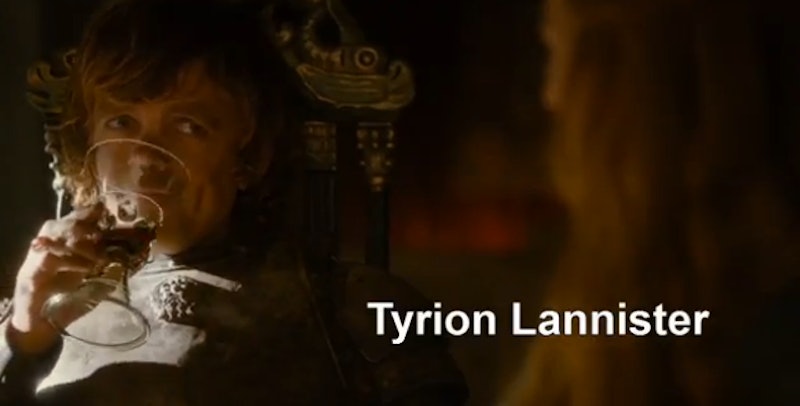 Ah, the fresh scent of a video mashup that's slipped through the cracks. Thanks to a Reddit thread — because of course it's Reddit — a too-great-to-miss Game of Thrones and The Office mashup has rightfully resurfaced. The video, which was made back in March by the spectacularly named YouTuber Jean Carlos De Oliveira Miranda, made its way into Redditor "abrokenclock"s thread about "that time when Daenerys was so unimpressed she looked directly into the camera like she was on an episode of The Office." Obviously the video then started making its rounds throughout the sticky webs of the Internet.

Considering the fact that breaking the fourth wall is the name of the game when it comes to the characters of the Dunder Mifflin office, it only makes complete sense that GoT and The Office would blend perfectly together. Salesmen and accountants totally have a lot in common with dragon queens and combatants, duh. In the mashup, GoT characters like Ned Stark, Varys, Maester Pycelle, Littlefinger, and a handful of the Lannisters are seen having mostly peaceful conversations — there's only one scene of someone being pushed out of a window — and handling a lot of parchment while The Office theme song plays in the background.

After watching Cersei Lannister basically be an Angela at heart — seriously, get her a cat, and she's pretty much the ice queen of the GoT office — we were inspired to imagine a few of our favorite shows as workplace comedies:

HAH. This one is hysterical to imagine. You just can't contain all of those whimsically dangerous characters in one office without something outrageous happening. Plus, it would be pretty fun to watch fights over spells and curses turn into squabbles over toner and refrigerator space.

The Guilty Remnants working with the police officers and the high schoolers? Yeah, that's definitely a sales, accountant, warehouse divide. The only problem would be the talking head shots for the GR members: would they break their silence? (Hell no.)

Oh boy. The flatmates working in an office together? Do they even know how to work? Odds are Winston would either be the Michael Scott of the group or the Kevin Malone who can't figure out how to work the copy machine. It could honestly go either way for him.

All we can say is that Billy Bob Thornton's Lorne Malvo would have a field day messing with everyone in the office.

Orange is the New Black

Someone needs to seriously make this happen. All of the other ones can be thrown in the trash, but this one needs to be turned into a TV show. The ladies of Litchfield were made for Scranton. We can already imagine them competing in the office olympics and dealing with sexual harassment training. (Also, anyone else thing Pennsatucky would be Dwight?).