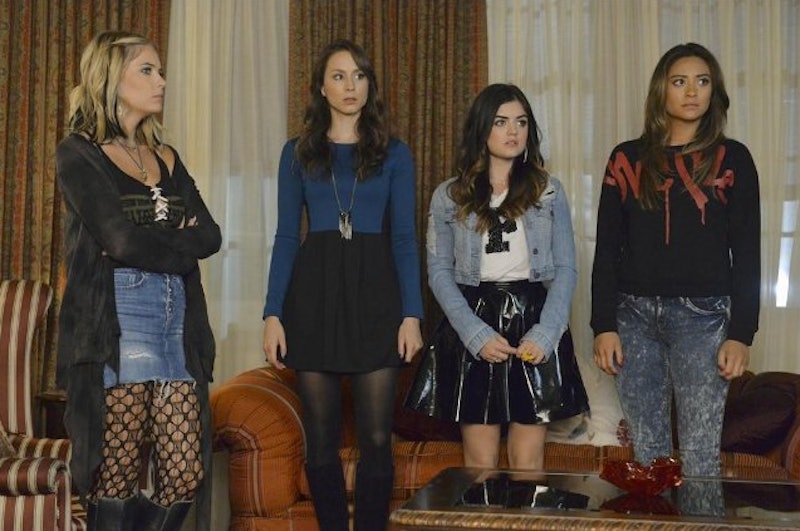 I've been griping about titles for two weeks in a row now, but even I have to admit that this week's — "Taking This One to the Grave" — was pretty spot-on: It's suitably eerie, loaded with multiple meanings (there's the metaphorical aspect, and then the fact that someone literally gets taken to their grave) and it contains a clever callback to the show's theme song.

Okay, enough about titles, let's get to the meat of things here: I'm not going to lie, it delivered on the drama front, plot holes notwithstanding — I'm honestly still kind of reeling from that disturbing last shot (SPOILER ALERT: Mona's wide-open, yet slightly clouded eyes were capital-C Creepy). SO UPSETTING (though I guess I should really be counting my lucky stars that Caleb wasn't the one who got the violent murder).

That said, you'd think an episode that very bloodily killed off Mona Vanderwaal would feature correspondingly explosive fashion, but... it didn't. There were a lot of meh-spectrum outfits, with a few truly bad ones mixed in (ie, Emily's graffiti'd sweater and stonewashed jeans; shown above). If I'm being honest, the super-anachronistic Radley uniforms (seriously, they'd look more at home on Mad Men) were more stylish than half the outfits on the episode...

Right? Spencer and Mona were totally workin' those uniforms.

Hmm, what else? Oh, right: Emily definitely gets an honorable mention for this shirt:

But, I think, in memoriam, it's only fitting that Mona should be this week's MVP (also, I'm obsessed with Peter Pan collars).

This week's fashion may have been weak (even if its 'A' game was not, har-har), but there's no denying that the season itself offered quite the tableau of looks — so if you were less than impressed this week, soothe your sorrows by taking a peek at Season 5A's cutest looks!