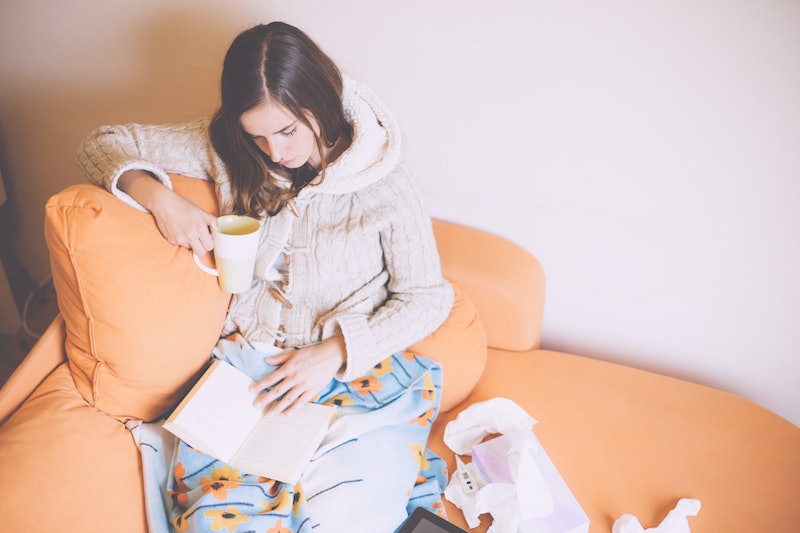 Say you're browsing the "New Releases" section at Barnes and Noble, or deciding on a Thursday night movie. Which novel or blockbuster are you going to choose? According to a new study appearing in the October 2014 Journal of Consumer Research, you'll probably pick the book or movie that you think will provide you with the biggest emotional reward. Consumers of culture want to feel. And those stories tend to be the ones that are based on real life because that's where all the feelings are, right? After all, if you know that the best-selling novel Murder Deep Deep in the Woods was based on "a Connecticut's family's HARROWING REAL-LIFE STRUGGLE AGAINST DEMONIC FORCES BEYOND THEIR CONTROL" it sounds scarier than a novel pulled straight from the author's imagination.

But is it actually going to scare you more? Researchers Jane E. J. Ebert and Tom Meyvis say no. You may think that the true story of a harrowing Connecticut murder will give you a better thrill, but even if the Connecticut family is entirely fictional, you'll still feel terrified by their harrowing struggle. Ebert and Meyvis point out that there is a significant disconnect between what you think will thrill you most and what will actually thrill you most, and that this disconnect may lead you to choose the wrong thing; in other words, if you opt for the seemingly scary nonfiction, your experience might not be as absorbing as it could have been. The researchers claim:

Readers may be too immersed in a tragic story to consider its fictional nature … As a result, consumers’ emotional reactions to these experiences may be just as strong as their reactions to experiences that involve more proximal events (such as real-life stories).

Anyone who's ever fallen in love with a fictional character knows exactly what Ebert and Meyvis are talking about.

When I was about 13, I had the world's biggest crush on Walter Blythe, a sensitive young poet who appears in the last three Anne of Green Gables books. It didn't matter that Walter was purely fictional; my feelings for him were stronger than they could have been for an actual human boy at that point in my life. I distinctly remember sitting in church one Sunday, staring at the forest that surrounded the chapel, and practically praying that Walter would walk out of those trees and sweep me up in his arms. Real boy? No. Realistic scenario? Nope. Real world emotions that affected my experience as a real human girl? Absolutely.

I'd venture to say that that's a fairly common experience for readers, especially young readers, when they discover books that truly move them. Witness these two young boys watching the scene in Harry Potter and the Half-Blood Prince when Dumbledore dies, and tell me that what they're feeling isn't affecting their experience of the real world:

So novels make us feel just as much as real-life stories do. So what? We've known for a long time that fiction makes people increasingly empathetic to others. This study is a great argument for the relevance of fiction, but can it be applied to anything else?

I think yes. As a matter of fact, I believe the people who should be considering this study's implications are the nonfiction writers, the people dedicated to telling true facts to a largely disinterested world.

Ebert and Meyvis' study is obsessed with something they call "the hedonic experience." In other words, they're talking about experiences that involve a certain degree of pleasure. ("Hedonic experience is arguably at the heart of what makes us human," begin the researchers of a neuroscience study from 2005.) When a reader is immersed in a hedonic experience — when they're reading a good novel, say — they are absorbed, transported, and feeling everything intensely, whether the story they're consuming is real or not. But when a reader is reading without any intention of finding that hedonic experience — e.g., someone reading the news — they're able to maintain a distance from the information, and they have a "weaker emotional reaction" as a result. As the researchers say:

We know that more distant events are construed at a higher, more abstract level of representation and evoke weaker affective reactions. People react with less intense feelings to events or objects that are spatially distant, that are temporally distant in the past or future, that involve more socially distant individuals, or that are hypothetical rather than real.

Events that are "spatially distant"? Sounds a lot like James Foley's execution, thousands of miles from American homes. Events that are "temporally distant … in the future"? Anything and everything involving climate change. Events that involve "socially distant individuals"? How about Michael Brown's death on the streets of Ferguson, a boy who is making national news but whose fate was so, so different than the fate of so many other boys his age. Sure, we're all citizens of the same planet, but let's be honest with ourselves: When real-life tragedy doesn't touch us, it doesn't always move us like it should. My connection with imaginary Walter Blythe felt so tangible that I half-believed he would appear in front of me, while my grief about James Foley's execution feels more intellectual, hypothetical, and seriously removed from my own personal experience, despite the fact that Foley went to my alma mater and knew my writing professors. That's a powerful disconnect right there.

What makes people invested? What makes them cry? Ebert and Meyvis' study appears to be saying that the answer isn't necessarily truth or fiction, but the way information is presented. When truth or fiction is given to us in the form of a good story, we care. As presented in the study's abstract, people's "actual emotional experiences are surprisingly insensitive to the distancing information." In other words, we can experience anything in a very emotional, "real" way — whether it takes place in our backyard or across the ocean or in an entirely imaginary universe — as long as it's presented in a way that compels us.

Perhaps writers of nonfiction — journalists — should look to the novel for that connection. Nonfiction stories are often miles away from the reader, physically, but there's no reason they shouldn't feel psychically closer. Close enough that the reality of nonfiction feels as tangible as the reality of Walter Blythe who never walked out of the forest toward me, or Dumbledore who died in front of those little boy's eyes and (temporarily) brought their reality to its knees.

I'm not saying nonfiction doesn't have the power to do this — because there are many instances when it can, and does. But it's interesting to consider it in context of this this study, focused on fiction, because it can provide a valuable framework for the nonfiction crew, too. There's always something to borrow from another genre.

In some ways, there's nothing fictional about fiction. It clearly has its claws in the real world. And what this study tell us is very, very relevant to the real world in all its messy, disconnected reality: good fiction holds the secret to making people care.