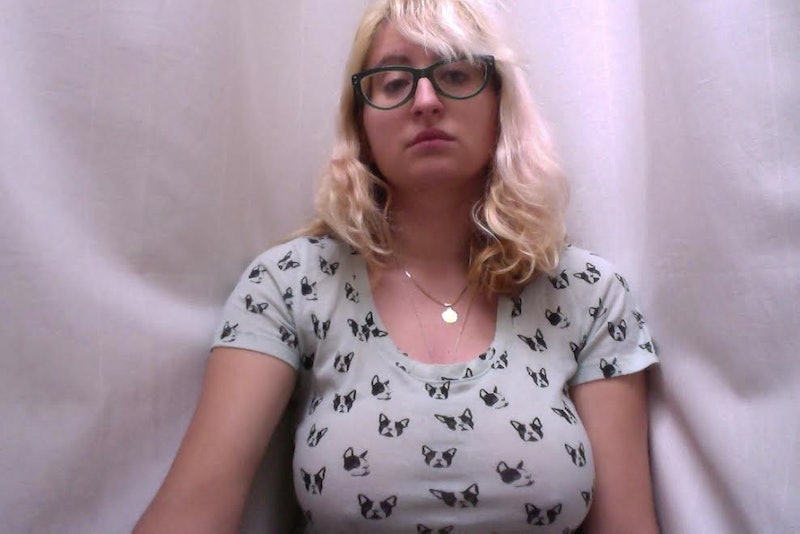 At age 12, adolescence hit me like a kick in the tits. After spending years demanding training bras, and then stuffing them with anything that seemed even remotely breast-shaped (knee socks, Wiffle balls, the occasional gourd), my actual breasts finally turned up, growing so quickly that my chest ached. My vast collection of Disney Princess T-shirts was rendered creepy instantly.

The cartoonish D cups blooming on my tiny tween body, however, did not magically transform me from a fragile nerd into Kelly Kapowski. Instead, they turned me into a fragile nerd who was now also being constantly ogled by older teenage boys and given the side-eye by popular girls. I hated everything about my breasts, and wished that I could trade them in for store credit like the crappy birthday present they were.

So naturally, I refused to acknowledge that I might even be a candidate for any bras, training or otherwise. Instead, I hunched over and drowned my lovely lady lumps in flannel and size XXL Alice in Chains T-shirts. (Hey, it was the '90s.)

But somewhere around my junior year of high school, things changed. Exposure to '70s feminist ideology (and being felt up by some very attentive teenage guys) changed my attitude toward my body. Suddenly, I decided I loved my breasts. I now dedicated myself to the cause of shoving them in everyone's faces in a variety of kooky halter tops and shirts with weird mesh panels. (Hey, it was still the '90s.)

After years of hiding, the freedom of running around boobs a-bouncing felt joyfully confrontational. I was also shocked to find that, now that I was feeling in charge of my breasts, fewer men seemed to give me looks like I was some helpless bunny that they wanted to devour. I felt like I now controlled the narrative of my body: My boobs, and I, were in charge.

I kept a near-perfect braless streak until graduating from college, when I realized that wearing a bra was apparently more important than having successfully earned a bachelor's degree when it came to landing an office job. So I let an elderly woman in the Nordstrom lingerie department feel me up, purchased a half-dozen bras that looked like back braces, and proceeded to be miserable at an office job like a true grownup.

But now that I've traded in my life of "professionalism" and "not lying around in your pajamas all day" for the wide world of freelancing, I wondered if I could reconnect with my old passion for the braless lifestyle. Would I poke someone's eye out if I let my breasts roam free? Would they get caught in door hinges or something? I decided to find out. Here's what I learned during my week of living bra-lessly.

D-etails: I packed boxes, participated in an exit interview, and gave awkward goodbye hugs sans bra during my final day at my office job.

Cup-clusion: If anyone had a problem with my braless ways at work, no one had the balls (or should I say boobs) to say anything about it. I had jumped on the bra train so many years ago — purely out of concern for appearing "professional" — that I assumed that the second I dropped that element of my carefully-crafted professional facade, everyone around me would suddenly realize the whole truth (i.e. that I was, and always had been, about as professional as Wiley E. Coyote).

But not one of the people who showed up to wish me well or have me sign non-disclosure agreements said a word about my braless state, and as the day went on and my worries fell away, it started to feel more and more appropriate to be braless. I had never been able to be myself at this job, but now that I was leaving it, maybe I could be. And maybe that authentic self had something to do with letting my breasts loose. I typed my final intra-office memo, breasts bouncing gently, and felt neither sexy nor vulnerable nor even especially comfortable. But I did feel a little bit more free.

During An Evening Out

D-etails: Later that same day, I helped myself to an open bar for several hours while free-boobing it.

Cup-clusion: I felt a little bit nervous when I took off my sweater at the bar — if anyone was going to ask me what the hell my hooters and I were doing, it would be my friends. But none of them (nor anyone else there) seemed to know or care that I had chosen to celebrate underwire-free. Once I had made a few rounds across the dance floor, I realized that everyone was way more interested in networking or getting free beers than in making me feel weird or uncomfortable about my jiggling.

As my nerves passed, I started to enjoy the feeling of bralessness. It gave everything I did a more relaxed feeling, like I was just sitting on the couch watching HBO Go. I felt like maybe I was shedding my old self, my corporate self — who was always anxious and uneasy and waiting to be revealed as an impostor — for a new, better, and more relaxed self — someone who accepts everyone and knows how to cook with quinoa and doesn't even want to eat processed sugar.

D-etails: I grabbed coffee, bought a caulking gun, and purchased some seltzer, with only a T-shirt between my boobs, me, and the world.

Cup-clusion: I was now getting into the braless groove in earnest, not even thinking about throwing one on when I woke up. My breasts felt physically comfortable, at least. Since they had come of age without a bra, getting used to bouncing around again was as easy for them as remembering how to ride a bike.

But the groovy, anti-establishment high I had felt over the first few days of bralessness had lessened. Outside a corporate or party atmosphere, bralessness felt like less of a statement and more just a sign of the profoundly casual lifestyle in which I was now taking part. I mean, is anyone hanging around a coffee shop at 1 p.m. on a Tuesday actually wearing a bra? I felt, in essence, like I was wearing a pair of Umbros on my chest.

Just Walking On The Street

Cup-clusion: On the street, and only on the street, did I truly notice that not wearing a bra made my breasts more visible. This is because some of the men around me were deeply committed to making it clear that they noticed that I was not wearing a bra. The random glances, burning holes through whatever T-shirt I was wearing, added up. Walking just a few blocks to the coffee shop or grocery store turned into an exercise in boob-based paranoia. Which guy is going to stare at my breasts in a harsh, obvious way that made me feel small and raw this time? Is it him? Is it him? Is it YOU???

I live near a post office, so I'm used to all sorts of people coming up to me to ask for directions to it. When an older man approached me on the sidewalk, I took off my headphones, ready to direct him two blocks in the opposite direction. But he didn't ask a question. He just stared. When I realized what was happening, I hugged my breasts to my chest and scampered away, filled with feelings of embarrassment and shame that I couldn't quite explain.

The glances that men on the street gave me on braless days were different from those out-of-the-corner-of-the-eye, trying-to-be-discreet boob peeks that I am well-aware happen when I wear a bra. They were glances that seemed to imply that I was dumb or naive or somehow easy sexual prey. They made me feel like a teenager again, cornered by someone's creepy older brother who keeps telling me how I don't even know how sexy I am.

I began to feel another feeling that I hadn't come up against since the end of the Clinton Administration: the sensation that I had somehow brought this trouble onto myself, the assumption that I was somehow "asking for it."

It turns out that my adventure in bralessness hadn't just dredged up my free-wheeling, free-boobed college-age self — it had also dredged up all the experiences and trauma that had made me shuck off my bra as a political statement in the first place. It reminded me of how, once upon a time, my sexuality had been nothing but a source of vulnerability.

I knew that my teenaged experiments in the sexual power of bralessness had been in reaction to the male gaze, but now, somehow, I was back where I started, my subconscious ready and eager to blame myself the second I became a victim of street harassment.

I'm not proud that my bra has become my safety blanket — after a week in the braless trenches, a part of me was convinced that I should stay and fight, until my braless breasts once again felt like the source of scorching personal power that they had when I was younger.

After all, a bra shouldn't feel like a way to make your life less stressful. It's just an overpriced piece of nylon. You shouldn't have to conform to a culture that says it is your job to keep your jiggling body in check, lest you provoke someone.

But, I'm sad to admit, this kind of trench warfare against street harassment felt exhausting, and those leers from strangers eventually sucked all the fun from my casual boob lifestyle. I didn't have the energy left to make this point day after day on the streets. I thought it sounded noble, but I just couldn't do it.

And so I went back home, and strapped myself back in.

More like this
35 Genius Secret Santa Gifts For Someone You Don’t Know Very Well
By Rebecca Deczynski and Lauren Grant
Amazon Has *Thousands* Of Products On Sale: Here Are The Best Deals To Get Before They Sell Out
By BDG Commerce
35 Mistakes You Don't Realize Are Messing Up Your Hair & Skin
By Rachel Bar-Gadda
If You Have Pets, You Probably Don't Realize You're Making These Common Mistakes
By Mackenzie Edwards
Get Even More From Bustle — Sign Up For The Newsletter