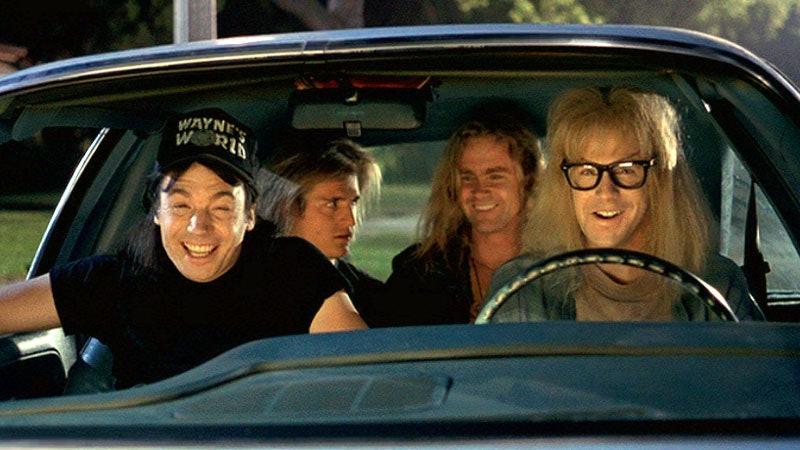 When you think of "Bohemian Rhapsody," there's a good chance you think of four things: those gorgeous harmonies, how you (think you) know every word, that really bad arrangement you once heard a high school choir perform — and possibly, most prominently — how it's a classic and hilarious moment in Wayne's World. But did you know that Queen's famous musical opus almost didn't make the cut in Wayne's World ? In fact, Mike Myers said that he had to fight incredibly hard to get the movie to use the song; the directors were gunning for a Gun N' Roses tribute, instead. The actor told this factoid to Marc Maron when he appeared on Maron's popular podcast, WTF :

An example of something I fought very, very hard for, and it was my first movie — it was 'Bohemian Rhapsody' in Wayne's World [...] They wanted Guns N' Roses. Guns N' Roses were very, very popular, they were a fantastic band ...] Queen, at that point — not by me and not by hardcore fans — but the public had sort of forgotten about them.

While Guns N' Roses' sound might have had more edge than Queen's sound, and while the band holds a firm place in classic rock music, their music lacks the epic quality that Queen's possesses, which is in part why the "Bohemian Rhapsody" segment works so well with Wayne's World.

We all know how the story ends — Wayne's World happened, Myers stayed, Myers and Dana Carvey got that classic scene that features them singing "Bohemian Rhapsody" in the car... and movie history was made. Scha-wing!

You can re-live that scene below.