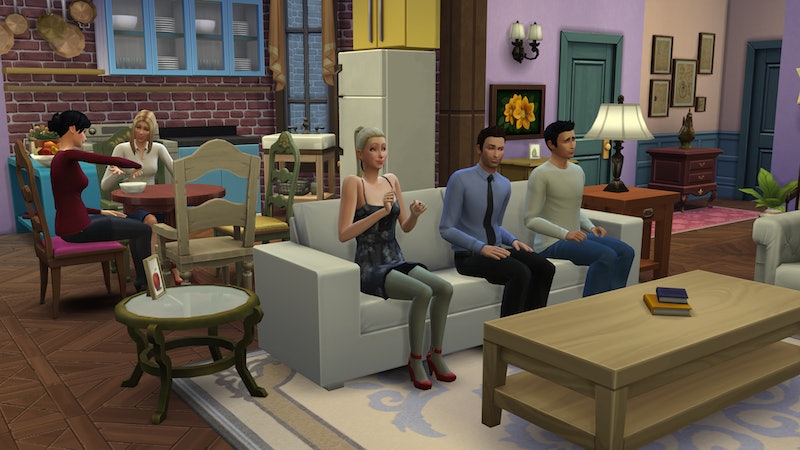 Do you remember The Sims? That computer game which allowed you to live vicariously through a group of simulated people who spoke an unintelligible language (I clearly remember one Sim angrily bellowing the not-word "voogensnot!")? Or, as some misanthropes might remember it, it was a game that allowed you to slowly destroy the lives of others with varying forms of death. (It still is — laughter and death are only some of the newer ways to perish in The Sims 4!) Hopefully you don't fall into the latter category, but if you're familiar with The Sims, then you'll definitely appreciate this. An Imgur user took the Friends characters and the impossibly amazing sitcom world they lived in and morphed the Friends cast into The Sims!

Often when people attempt to fuse pop culture and The Sims, the characters come off as pale imitations of their real-life counterparts. However, in the photos below, you'll see that these simulated computer-Friends look remarkably similar to their human buddies. Even the rooms are stark replications. It will make you wish you had this Friends pseudo-NYC universe implemented into your Sims system back when you were playing. Think of all that you could have done! You could have made Ross and Rachel get together back in Season 4! It would have been like writing Friends fanfic, right? And imagine all of the things The Sims version of what Joey would utter! (Probably "voogensnot," now that I think about it.)

While you can't exactly play The Sims-Friends, you can at least take a look at these phenomenal replications of the Friends world below. You can click here to see the rest of the photos. Clearly, we'll never be too old for The Sims.