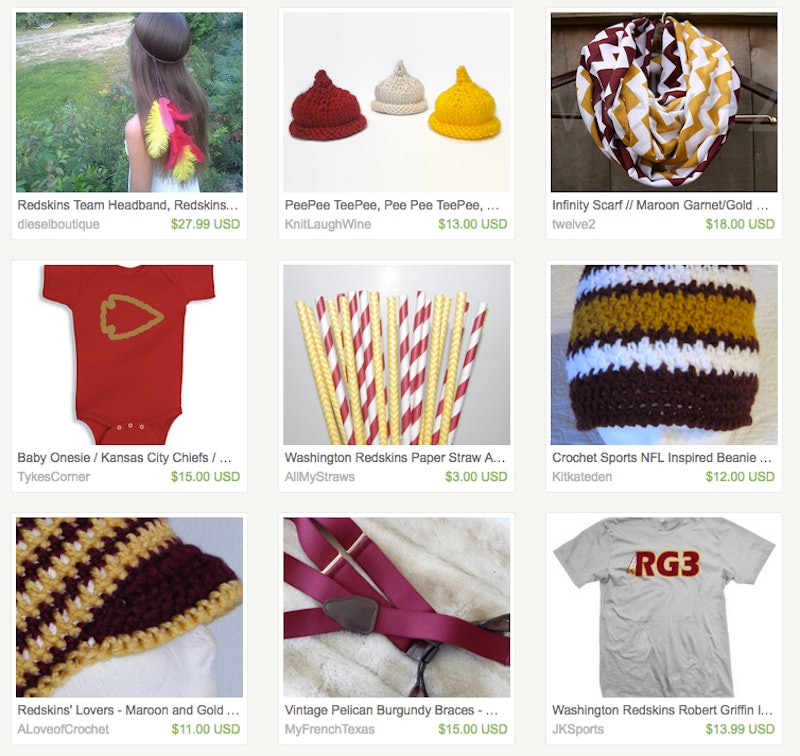 According to Colorlines, Etsy has banned their sellers from using the Washington Redskins team name and logo on their site. While you might be thinking to yourself are fans still really using that name?, the answer is yes. After all, the official team name hasn't been changed, and a quick search on Etsy resulted in 279 items that will need to adjust their product titles accordingly.

This policy change was announced yesterday on Etsy's blog:

You may have been following the struggle of one ethnic group that has made a lot of headlines lately: Native Americans and their fight against the Washington, D.C. professional football team name and mascot, which they have long considered offensive, disparaging, and racist. This very poignant ad was followed by a decision by the US Patent and Trademark Office to cancel the team’s trademarks. Following this decision, an increasing number of public figures, politicians, schools, news publications, and private companies have spoken out in protest of the name and mascot.

Like the Trademark Trial and Appeal Board, we at Etsy find the opinion of the minority group itself to carry most weight in determining whether the mascot is disparaging. In no uncertain terms, Native American groups have consistently advocated and litigated that the term “redskin(s)” is disparaging and damaging to Native Americans. Therefore, it will no longer be permitted in our marketplace.

We understand that fans wish to support their favorite football team, and we do not believe that fans who are attached to the mascot have any racist feeling or intent. We also understand that some fans view the name and mascot as an homage to Native Americans, and we do not doubt their noble intent, but the fact remains that Native Americans themselves find the term unacceptable.

Etsy sellers will be allowed to continue selling items that use the team's colors and location (Washington, DC), but any product containing the name or the logo will no longer be allowed. The change was effective immediately, but from the looks of it, there are some steadfast Etsy sellers/fans that have not budged. Etsy says their Marketplace Integrity Team will be contacting those members.