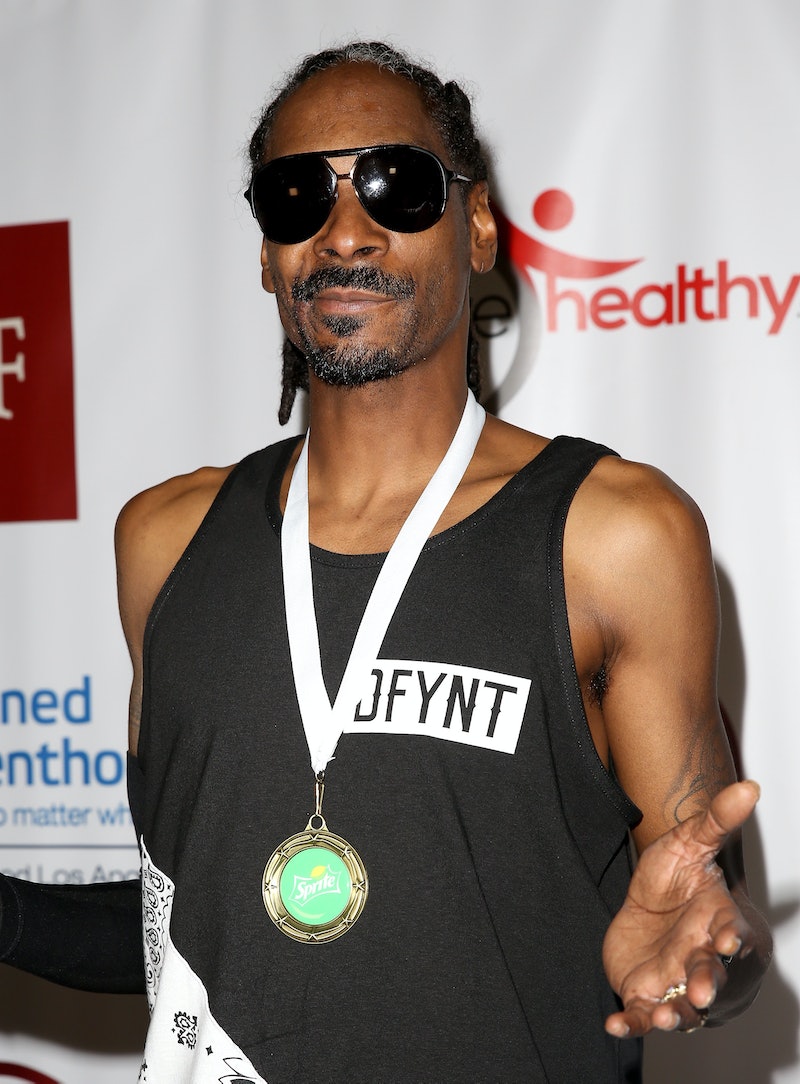 Well, this is certainly disappointing. Late on Sunday night, Snoop Dogg posted an anti-gay message to his Instagram page. The rapper took a shot from another male user's account, which featured him lying in bed with another man, and wrote the caption, "U n ya boyfriend since u like Jumpn on my page disrespectn bitch boy go suck ya man n get off my line f. A.G." If you're confused at to what the hell Snoop was saying, get in line — but I think we can all agree that it's inappropriate, ignorant, and anti-gay, no?

A little more than a half hour after Snoop Dogg posted the image and message to his Instagram and Twitter, he pulled a Justin Bieber and deleted it — but of course, not before numerous people (including Buzzfeed) saw the the offensive post and shared it. The user from whom Snoop took the photo from has since deleted his account.

Though this is extremely disappointing (it's 2014 — is this really still happening?), sadly, it isn't incredibly surprising. Shortly after Frank Ocean came out as a gay man, Snoop Dogg wasn't exactly supportive, telling Huffington Post, "It's like a football team. You can't be in a locker room full of motherf**king tough a** dudes, then all of a sudden say, 'Hey, man, I like you.' You know, that's going to be tough."

What's messed up, though, is since the rapper deleted the message not long after posting it to Instagram, clearly he knows it was wrong. Actually, it's sort of mind-boggling that he posted it to begin with. It's a shame that there are people out there who still feel this way — and it's even more of a shame when said people have almost 4 million Instagram followers and people looking up to them.

Also, for the record, if Snoop does want to offend people on social media, he might want to think about using some, you know, punctuation, so people at least can understand what on earth he's saying.

More like this
Kourtney & Travis Made Their Marriage Legal & Drove Off In A "Just Married" Car
By Bustle Editors
What Is "The Ick?" The TikTok Dating Term, Explained
By Courtney Young
Twitter Is In Utter Meltdown After 'Derry Girls’ “Poignant” Finale
By Sam Ramsden
The WAGatha Christie WhatsApp Messages Have Been Released — & They're Wild
By Sam Ramsden
Get Even More From Bustle — Sign Up For The Newsletter