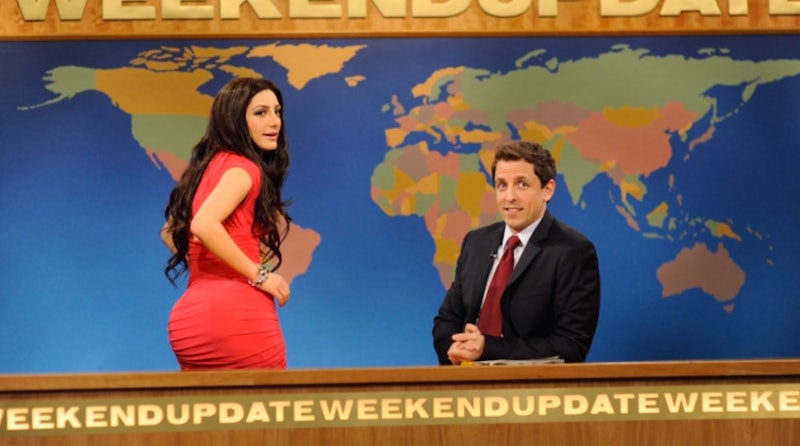 Nasim Pedrad's absence from the upcoming season of Saturday Night Live , though unsurprising given her new role in John Mulaney's sitcom, Mulaney, has left many heartbroken even trying to imagine the show without her genius impersonations and characters. Like, her amazingly spot-on Kim Kardashian impression — I don't know what we're doing to do without that in all of our lives. But, there is a silver lining: While that brave new world still looming in the distance, Nasim Pedrad did tell a pretty amazing Kim Kardashian story during her appearance on Conan recently that might do a bit to soften the blow of her leaving SNL. And by "pretty amazing," I really mean the best ever.

Let's set the scene: To begin, Pedrad explains that she was terrified to meet Kardashian because of a) the way she'd portrayed her on SNL as someone literally only consumed by thoughts of her own backside, and b) because she hadn't slept in two days and "looked like a person that woke up in a dumpster," while Kim was airbrushed to perfection and looked like a living, breathing wax doll. Fears were soon quelled when Kim was "really, really sweet" — and all she really just wanted to know was, "do we really sound like that?"

The actual account of the encounter isn't the best part of Pedrad's story, though — the best part is how Pedrad tells it, which you really need to watch to experience. I will say it's hilariously unintentionally (or, perhaps, intentionally?) ironic to the max, and, unfortunately, it'll probably simultaneously give you momentary joy and then major depression when you realize Pedrad still won't be on next season of SNL. There's also a pretty great clip of a cut SNL sketch in which Pedrad portrayed Aziz Ansari, which, yes, will only make that pain of realizing she's no longer on SNL stronger (still hilarious, though!)