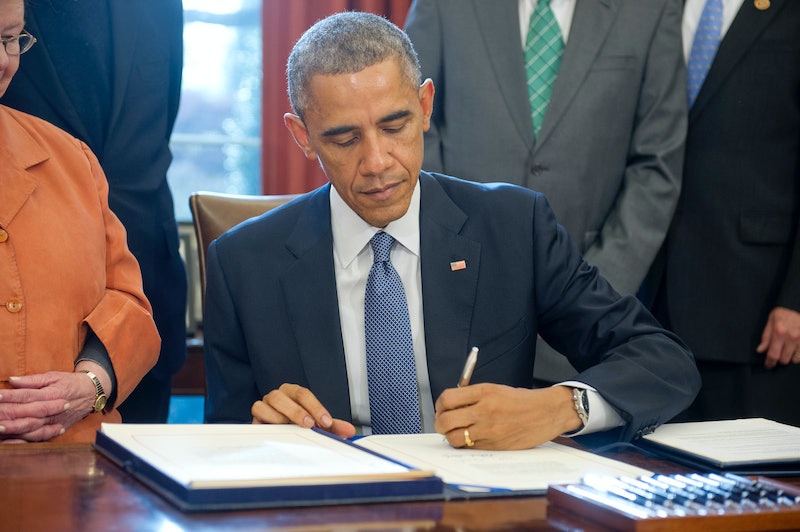 On Monday, the Government Accountability Office released a report that indicates healthcare plans aren't following abortion-service restrictions under the Affordable Care Act. Which sounds like one of those overarching, twisted, out-of-context conservative lines — but is actually kiiiind of true.

So what's going on? Well, the original deal brokered for Obamacare's passage ruled that health plan providers could not use federal funds to cover "elective" abortions, as per an executive order issued by the president in 2010. The only abortion services that federal funds were to cover would be for cases of life-threatening pregnancies, rape, or incest. But out of the 18 insurers reviewed in the GAO report, only one was creating a separate line-item for abortion services.

The report didn't officially say that federal funds were being used for abortion services, but did raise some eyebrows about if the lack of separate budgeting means that the general fund was also being used for "non-elective" abortions. Currently, insurers are still allowed to offer abortion services, but they are required to pay separate premiums for these services.

And OK, Politico reports that the House Republican leadership commissioned the report, so they were already digging for something there even if the GAO is technically a nonpartisan watchdog group. But this could still be bad for Obama on both sides of the aisle. The ACA brokerage involved anti-abortion Democrats, and this was a key provision in pushing Obamacare through. The Associated Press reported that the Health and Human Services Department responded, saying it "acknowledges that additional clarification may be needed."

Additionally, the GAO report found that many of the insurers were unaware of some of the fine print with providing abortion services under Obamacare, such as a requirement to notify policy holders if they cover elective abortions. This has outraged both abortion supporters and opponents, who demand clearer information.

So it this creative accounting or just a simple misunderstanding? The GAO report won't clear that up. But it will give Republicans plenty of ammo for this upcoming election season, alongside the myriad of other Affordable Care Act foibles.

Hopefully, it will at least clear-up the messy dual payment plan, which requires that insurers that elect to carry abortion services must collect money from policy holders separately, and keep the money completely removed from the federal funds. The problem is that no one was really given a guidebook on how to do any of this, which perhaps has led to some of the confusion.